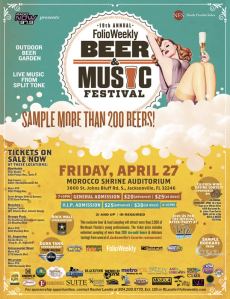 For nearly 20 years Folio Weekly has been throwing a party: an annual beer party, that is. This Friday marks the 19th Annual Folio Weekly Beer and Music Festival at the Morocco Shrine Auditorium on St. John’s Bluff Road. This year the event will boast over 200 beers to sample, food from multiple local restaurants, hookahs from The Casbah, and much more.

Scott Russell of North Florida Sales lists great beers such as Sweetwater, Stella, Leffe, Redhook, Boddington’s, Bass, Kona, Woodchuck, Southern Tier, Blue Point, and Murphy’s that will be present. He also mentioned that several awesome local brews from Engine 15, Green Room, and Bold City will be represented. With a few surprises thrown in, there is sure to be something for everyone at this event.

Way back in 1993, just as the craft beer world started its relentless onslaught on the big boys of the beer world, the Folio Weekly began throwing the once a year party. In the 19 years since the suds festival has grown and become an annual rite of passage for spring in Northeast Florida. Calling themselves the originators of the First Coast beer festival scene, the Folio is rightly and justifiably proud of the event that draws 2,500 of their closest beer buddies for a night of brew, food, music, and laughter.

Tickets for the event are available at multiple outlets – see Folio’s website for locations — and are $20 in advance for general admission and $25 for VIP, which gets you in an hour early. Tickets at the door are $5 more. Doors open to VIPs at 6:00 pm Friday, April 27 and 7:00 pm for general admission.