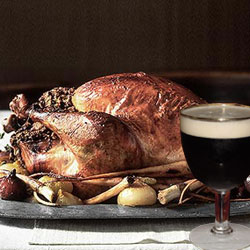 Many beer aficionados know the story of how the Pilgrims landed at Plymouth Rock because of a shortage of beer aboard the Mayflower. Beer was used as a water supply since water itself was unsafe to drink. Story-tellers point to a diary entry from an unnamed passenger that says, “We could not now take time for further search…our victuals being much spent, especially our beer…” The situation, it seems, was dire. Or, so the big American breweries would have you believe.

The truth of the matter is that the Pilgrims were not put out at Plymouth Rock because of a lack of beer. They were put out because of a lack of time. Quite simply, the Mayflower was due back in England and the Captain and crew told the Pilgrims to pick a spot and get off. The beer supplies on board were ample for the return trip to England. The beer companies wanted consumers to think that beer was as American as apple pie so they ran ads that said, “The Pilgrims drank beer.” While that is not entirely untrue, it is a stretch.

Regardless of the historical accuracy of beer being the reason America is here as we know it, beer is definitely a welcome addition and has a place on your Thanksgiving table. This time of year brings several interesting styles into season including Oktoberfest/ Märzen beers, fresh hop ales, and pumpkin beers. All pair nicely with your holiday dishes.

The original Oktoberfest was held in a field outside the city gates of Munich in the early 1800’s to celebrate the wedding of Crown Prince of Bavaria Prince Ludwig I and Princess Therese of Saxe-Hildburghhausen. Germans being German, beer was an important part of the celebration. Oktoberfest beer is a traditional variety also known as Märzen. It is generally darker and stronger than traditional beers with alcohol content of around 6%. It is characterized by medium to full body, malty flavor, and a clean dry finish. Like all German beer, true Oktoberfest beer is brewed according to the Reinheitsgebot that precisely defines the four ingredients allowed in the brewing of beer: barley, hops, malt, and yeast. Oktoberfest beers are particularly good with meats and poultry; indeed a traditional food at Oktoberfest in Munich is roasted poultry.

Hops are the bittering component of beer. They grow on tall bines and consist of small cones that contain the all-important bittering agents. The vast majority of beer is made with dried hops because if the fresh picked cones are not dried within 24 hours of picking, they will begin to rot. And rotten hops do not make good beer. In the fall hop-picking season, some adventurous brewers rush out to the fields to gather fresh hops and brew with them. Because you need more fresh hops – somewhere in the neighborhood of five times more – in brewing than the concentrated dried hops, the resulting beer has a much more vegetative, earthy flavor than dry hop beers. Because of the amounts of hops necessary to brew these beers, they are made in very small batches. Fresh hop ales pair wonderfully with fresh vegetables and dishes with vegetables in them like green beans, brussel sprouts, and even stuffing made with onion and celery.

In the early days of America, malted barley was extremely hard to come by and had to be imported from England. This made the malt very expensive and out of the reach of the lower classes. So, colonists began searching for other items that could be used as sources of sugar in their brews. Pumpkins were indigenous to America, so colonists began using them for beer. Early pumpkin brews bear little resemblance to today’s brews, which generally skew more towards the pumpkin pie spices rather than the actual fruit. Because of their sweet nature, pumpkin brews are perfect with desserts like pumpkin and sweet potato pie.

Keep up to date on all the beer happenings and news going on in town at the ALL NEW www.JaxBeerGuy.com.