It is no secret that Florida is blowing up as a state to be reckoned with in the craft beer industry. With new breweries opening at a breakneck clip and more established breweries scrambling to expand their production capacity, things are definitely looking up for beer-lovers in the Sunshine state. And through all the hustle and bustle to make Florida a standout state in brewing, Tampa’s Cigar City Brewing Company has been a guiding force.

Considered one of the best breweries in the country by beer fans and the press, Cigar City has won their notoriety through producing high quality core beers as well as highly-sought-after special releases and seasonals. USA Today ranked the brewery as the nation’s fifth best saying, “…Cigar City, a Florida favorite, has fans from far outside the Panhandle state for their unique lineup of beers.” And Paste Magazine says of the brewery’s beers, “Cigar City’s Good Gourd was one of Paste’s Best Pumpkin choices and the second-highest beer we reviewed all year-long. The Jai Alai IPA took second-place in our 64-beer IPA challenge.”

Owner Joey Redner started the brewery as a result of a trip he took to Portland, Ore. for a wedding in 1994. Before that he says he had not been exposed to much in the way of craft or import beer. But, when he tasted fresh craft beer in the beer crazed northeast, he was hooked. In 2004, Redner began experimenting with brewing his own home batches of beer. He also began writing a beer column for the St. Petersburg Times that allowed him to evangelize about the pleasures of craft beer.

Several years later, Redner began looking at the feasibility of starting his own brewery. Along the way, he met up with Wayne Wambles, a brewer who had worked for several other breweries including the now defunct Buckhead Brewing Company of Atlanta, Ga. and Foothills Brewing Company of North Carolina. Wambles brought with him a wealth of brewing knowledge and skill that included multiple medals from the Great American Beer Festival and the World Beer Cup.

With the addition of a head brewer, Cigar City Brewing was on its way to becoming a legend in southern beer production. The brewery started with a 15 BBL brewhouse tucked in to a 6,600 sq. ft. warehouse. The first order was filled and sold in March of 2009.

Since then Cigar City has expanded its brewing operation and has become a powerhouse brewer in the Southeastern United States. Fans pack the brewery for their special releases like the annual Hunahpu’s Imperial Stout. At last year’s Hunahpu’s Day Release event, beer hounds by the thousands lined up in the middle of the night prompting a change in the event for the 2014 release.

Recently, the brewery has announced their 2014 release schedule including a greater emphasis on nitro brews that is sure to be a hit with beer lovers. 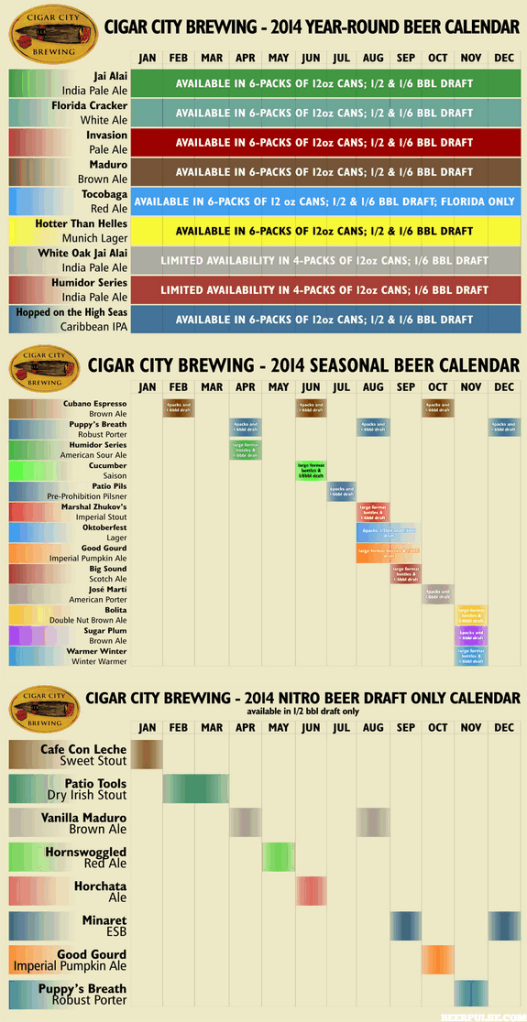