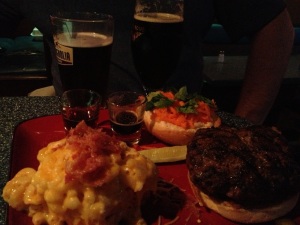 A burger paired with craft beer at Kickbacks Gastropub. Photo courtesy of jaxbrewbitch.com

When you are looking for the best place to grab a bite along with a pint of freshly-made craft beer you do not need to look much further than the hundreds of brew and gastro pubs that have popped up around the country. Matching great beer to food is quickly becoming as popular as matching food with fine wines. So much so that there are several programs that seek to certify beer servers in much the same way wine servers can be certified as a sommelier.

Here in Jacksonville, Fla. weary travelers staying downtown can catch a quick cab ride to the King Street Beer District to dine at Kickbacks Gastropub and its soon-to-open companion establishment Goozlepipes & Guttyworks where they will find over 200 draft beer choices. Also in the area are restaurants with estensive beer offerings like The Blind Fig, European Street Café, Lola’s Burrito Joint, Carmine’s Pie House or Pele’s Wood Fire. For those with a smaller appetite but a thirst for craft beer, there is the soon to be open Silver Cow that will feature an ever-changing menu of small bites made fresh from locally sourced ingredients.

Further away from downtown are brew pub restaurants like Seven Bridges and World of Beer at Tinseltown on Southside Boulevard. Seven Bridges, part of the Gordon Biersch restaurant chain, brews its own beers on site and serves them paired with a full menu of steaks, seafood, and poultry. At World of Beer find 50 taps of craft beer and over 500 bottled beers along with a menu of flat breads pizzas, sandwiches and other pub fare. At the beaches one of the areas oldest brew pubs, Ragtime – now part of the Gordon Biersch company – serves freshly brewed beers along with Irish-inspired dishes. A block or so down the street from Ragtime is Poe’s a restaurant themed after Edgar Allan Poe that serves an array of unique burgers along with a large selection of quality craft beers.

Another idea for craft beer and food might be to swing by one of the several local brewery tap rooms that wither offer food or host food trucks for hungry patrons. Aardwolf Brewing Company in the San Marco area near downtown often has a food truck outside providing tasty dishes that beer-lovers can carry inside to enjoy with a cold pint. And Bold City Brewing Company has an in-house caterer called Jolly Mon that provides burgers, wings and other tasty foods fresh from its grill in the brewery. In Orange Park, Pinglehead Brewing Company exists inside the same storefront as Brewer’s Pizza and therefore benefits from its ability to provide hot, fresh pizza as well as cold beer. At the beaches Engine 15 Brewing Company serves up pub grub along with freshly-brewed beers to throngs of thirsty beach-goers and local alike.

But, even if a brewery does not offer on-premises food, all allow food to be brought in. At the Intuition Ales Works tap room in the Beer District, guests are encouraged to bring their own food or to order from the list of restaurants that deliver. The tap room staff maintains several menus behind the counter for perusal or can certainly make a suggestion. Similarly, the staff of Mile Marker Brewing Company in St. Augustine is pleased to allow outside food into the tap room.

Given the wide range of establishments available for the beer-lover to both dine and enjoy craft beer, there is no reason not to indulge. And, as craft beer expands in popularity, more and more venues will be added to the fray. For hungry craft beer-lovers, the times are indeed tasty.