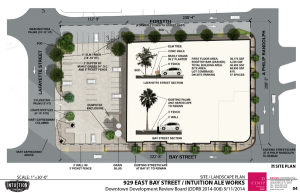 According to an article by the Jacksonville Business Journal, Intuition Ale Works is set to make another shot at building a brewery in downtown Jacksonville. The location is reported as being at the corner of A. Phillip Randolph Boulevard and Bay Street just steps from the Baseball Grounds, Veterans Memorial Arena and Everbank Field.

Ben Davis, owner of Intuition has been looking for a suitable location to expand his burgeoning brewery for several years now. A previous attempt to build downtown on the Shipyards property was thwarted by the city. The proposed new location is just a few blocks the Shipyards.

Davis is scheduled to appear before the Downtown Development Review Board Thursday to pitch his idea. The proposed brewery would occupy an existing building with an attached brick warehouse. Plans submitted to the city reveal a rooftop biergarden along with an indoor tap room.

Intuition has made several attempts to find a suitable building or location over the past few years with Davis stating that his ideal location would be in the city core because of his desire to be part of downtown revitalization. The brewery’s Smoke IPA, and IPA brewed with smoked malts, was brewed specifically to be sold at downtown breweries and to support the “Downtown is on Fire” campaign.