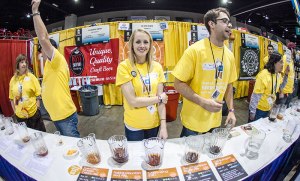 It is the time of year when all beer-lovers begin thinking about heading for the mountains. No, not the mountains referred to in the slogan for the famous macro-lager, the mountains of Denver, Colo. for the annual Great American Beer Festival. Now in its 34th year, the festival is considered by many to be the greatest in the world and with nearly 3,500 beers to taste from over 800 breweries, it is not hard to see why it has this distinction.

Tickets for the festival have sold out in minutes for each of the last six year, so organizers suggest you make your ticket-purchasing plans early. Tickets are priced at $80 for the general public and $75 for Brewers Association or Homebrewers Association members. Tickets for the members only session on Saturday, September 26 are $65. Member ticket sales begin Tuesday, July 28 at 12:00 p.m. Eastern Daylight Time. Public ticket sale begins Wednesday, July 29 at 12:00 p.m. Eastern Daylight Time. Those seeking to attend this year’s festivities are instructed to go directly to Ticketmaster.com to purchase tickets and expedite the sales process. It is also suggested that ticket-seekers log in to Ticketmaster early as tickets will undoubtedly go fast.

The festival is to be held at the Colorado Convention Center in downtown Denver on:

This year the event is expanding by an additional 90,000 square feet to allow for greater attendance and an enhanced experience. New this year is a Meet the Brewers area with breweries that have commited to have brewery staff manning their booths for the entire festival. In addition, with more space, more breweries and more chefs in 2015, GABF’s Farm to Table Pavilion is getting a new name: paired. paired will feature 21 chefs from nine states, including five James Beard Award nominees and two Food and Wine Best New Chefs, each personally plating their dishes for guests and talking about their dynamic pairings. In addition, the exclusive craft beers served in paired are available only in this pavilion and not in the festival hall.  As in previous years, a separate ticket ($145) is required for entrance. paired tickets are available exclusively to members of the American Homebrewers Association and the Brewers Association and as such, can only be purchased during the members only sale on July 28.