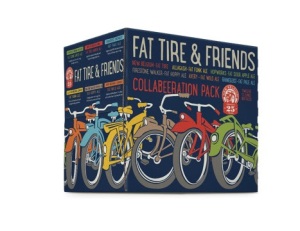 To long-time readers of this blog it will come as no surprise that this announcement has me very excited. In preparation to celebrate 25 years of brewing their flagship Fat Tire Amber Ale, New Belgium Brewing Company is reaching out to other breweries to help them create five collaborative versions of Fat Tire.

The brewers that will create these one-of-a-kind mash-ups include; Allagash Brewing Company  of Portland, Maine, Avery Brewing of Boulder, Colo., Firestone Walker of Paso Robles, Calif., Hopworks Urban Brewery of Portland, Ore. and Rhinegeist Brewery of Cincinnati, Ohio. Each brewery will bring something different to the classic Fat Tire style that is characteristic of their own brewing styles.

The collaboration brews will be available in a mixed 12-pack in mid-June 2016.

Ft. Collins, Colo., March 1, 2016 – New Belgium Brewing celebrates its 25th anniversary with the release of five collaboration beers reinterpreting the brewer’s flagship, Fat Tire Amber Ale. Fat Tire was first conceived on a bike ride through Belgium and came to life as a homebrew in the late 1980’s. Spurred on by accolades from friends and a grip of homebrewing awards, New Belgium co-founders Kim Jordan and Jeff Lebesch took the beer commercial in 1991. Since then, the 100% employee-owned company has become the nation’s 4th-largest craft brewery with distribution in 41 states and a second brewery just opening in Asheville, NC. New Belgium brewers teamed up with brewing friends at Allagash Brewing Company (Portland, ME), Avery Brewing (Boulder, Colo.), Firestone Walker (Paso Robles, CA), Hopworks Urban Brewery (Portland, OR) and Rhinegeist Brewery (Cincinnati, OH) for the project.

“In the early days we used to say that if we could just sell 60 cases of beer a week we’d be a success,” said co-founder, Kim Jordan. “It’s a different landscape these days yet the things that make our work meaningful – community, camaraderie, creativity – are still alive and well. Working with so many great friends and talented brewers while reimagining Fat Tire is the perfect way to celebrate all the things we love most about our craft.”

New Belgium reached out to collaboration partners who were long time friends and innovative brewers. For the mixed 12-pack, Allagash is producing a version of Fat Tire using a Belgian yeast sourced from the Poperinge region and a touch of the Allagash house Brettanomyces – expect notes of stone fruit, sweet tart and peppercorn; Avery will focus on a fruitier hop bill also with a dose of brett evoking notes of apricot and pineapple; Firestone Walker is creating a west coast interpretation of Fat Tire with an assertive hop profile and a light lager yeast; Hopworks Urban Brewery (HUB) is creating a tart Fat Tire bringing in apple and lactobacillus to help highlight that beautiful green apple snap inherent to the original Fat Tire; and Rhinegeist has transformed Fat Tire into a Belgian XPA, combining a fruity Belgian yeast strain with bready-sweet European and Colorado malts for a beer to please hopheads and wine drinkers alike.

Mixed 12-packs will feature two New Belgium original Fat Tire Amber Ales plus two of each interpretation beer. The beer will release mid-June, prior to New Belgium’s 25th anniversary, officially on June 28th. A party at New Belgium’s new brewery in Asheville on August 27th will celebrate that facility’s grand opening as well as 25 years of brewing innovation and good times.