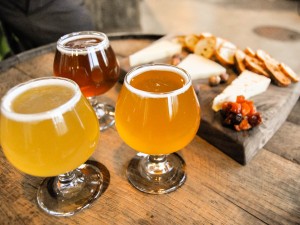 When summer’s heat gets unbearable, reach for a refreshing saison to help cool you down. Before the time of refrigeration, some beers were brewed in the cooler months of the year and laid down for use in the warmer months of summer. This method required the beers to be hearty enough to survive for months in the cask, but not so strong that they could only be consumed moderately. After all, saisons – the word literally means in season in French – were meant as thirst-quenchers not barn-burning party brews.

As is the case with many beers, saisons were originally brewed to fill a specific need. In the early 1700s, Europe was in the midst of a water crisis – teeming with potentially lethal microbes, water was undrinkable. A solution had to be found or the population would dwindle in the grips of dysentery.  The answer came in the form of beer. Though water was decidedly not potable, beer made from that water was safe to drink and, well, tasty.

The need for some sort of liquid refreshment was particularly necessary for farmhands, called les saisonniers (do you see a connection to the name of the beer – I thought you would), who toiled in the fields during the hot summers of southern Belgium. Farmers, being the practical, work-oriented sort they have always been, realized that would need to come up with a refreshing lower alcohol beer that could be used to quench the thirst of field laborers and provide vitality without the counter-productive results of a pissed workforce. Thus, the birth of saisons, low-alcohol ales designed to quench thirst and keep farm-hands working the fields.

Because each farm had its own recipe for the ales using herbs and spices abundant to them locally, an exact description is hard to pinpoint. Saison was more of an idea of how a beer of its sort would taste than a complete thought even though it occurred very commonly across the countryside.  The most common characteristics of saisons are their spicy, herbal flavor and the use of wheat as a major ingredient. Because of the wheat, the brew is generally hazy in appearance and pours with a generous, billowing head of foam.

As the world industrialized, the need for field workers diminished and the demand for saison waned. By the mid-nineteenth century, the world had become enamored with the pale lagers of Bavaria further causing the decline of seasonal beer styles and saisons. Couple that decline with the onslaught of two World Wars in the first half of the twentieth century and the fate of saison as a beer style was all but sealed.

But, even through those tumultuous times, several of the small farmhouse brewing operations survived and became full-fledged breweries producing other Belgian styles as well as their own distinctive saisons.

True to the Belgian brewer’s spirit, creative touches began to find their way into the brew. Additives like coriander and black pepper along with infusions of beet or Havana sugars began to appear raising alcohol content from around 3.5% to 7.5% or better. The color ranges from straw to that of dark honey. The aroma is often reminiscent of bananas or even bubble gum depending on what was used in the brewing process. Arguably the most complexly flavored style of beer, saisons may taste sweet, tart, crisp or herbal. Often this style is referred to as having Champagne-like qualities.

Whether you opt for a lighter, refreshing brew or a more hearty full-flavored variation, a cold saison is just the thing to quench your thirst on a hot summer afternoon.