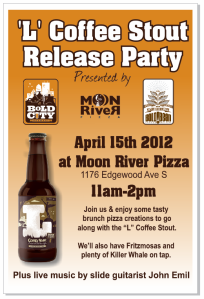 The week that has been eagerly awaited by beer lovers all over the First Coast is almost here; Jacksonville Beer Week! Events keep getting added on a daily basis. If you cannot find a beer-centric event that appeals to you next week, you really are not trying very hard!

Bold City Brewery Has a Full Slate of Events Coming Up

Our friends over at Bold City Brewing always seem to have a lot going on. Brian and the crew work hard to keep you supplied with fresh, tasty beer both at the Tap Room and in bottles at your local grocery and liquor store. As if that were not enough, they are constantly providing opportunities for unique ways to taste their outstanding brews. The end of March and in the beginning of April the gang has a whole slew of events to keep their legions of fans happily sipping away at a cold brew. Check out the list below for all the details.

Saturday, March 31 starting at 11:00 am for VIPs ($15) and 12:00 noon for general admission ($5) Metro Jacksonville (www.metrojacksonville.com) is sponsoring an event in the Bold City parking lot that will round-up a collection of Jacksonville’s food trucks for the Jax Truckies: The Jacksonville Food Truck Championship. Attendees can purchase food tickets for $1 each or 20 for $18. This is a great opportunity to sample the great food these trucks have to offer and support the food truck movement that is sweeping the nation. Admission is limited to the first 300 attendees.

On the same day, representatives from Bold City will travel to Gainesville to pour their brews at the Greater Gater Beer Festival. Magnolia Parke at 4700 NW 39th Avenue will play host to this annual event from 1:00 pm to 5:00 pm. Included with your admission ($25 in advance, $30 online, $35 at the door) are unlimited samples of over 100 beers, unlimited food samples from local restaurants, and entertainment. Get more information at www.floridabeerfestivals.com.

Saturday, April 14 the gang will travel back to Gainesville for another great beer festival. This time it is the Hogtown Beer Festival to be held at the beautiful Kanapaha Botanical Gardens located at 4700 Southwest 58th Drive. Tickets are $35 for general admission and $75 for VIP. Expect to see a lot of great beers from most of the breweries in Florida as well as regional brews, food pairings, educational seminars, and home brewing demonstrations. There will also be a lineup of stellar entertainment including Robin Rutenberg & Friends a fabulous (http://www.robinrutenberg.com) and talented Jacksonville group. Get lots more information at (www.hogtownbeerfest.com).

Sunday, April 15 join the brewery crew at Moon River Pizza (www.moonriverpizza.net), 1176 Edgewood Ave S # 2, for the ‘L’ Coffee Stout release to be served with Moon River breakfast pizza. They will also be serving Killer Whale Cream Ale and Fritz-mosas (mimosas made with Fritz heffewiezen). Music for the party will be provided by John Emil. The release brunch will be held from 11:00 am to 2:00 pm.

Tuesday, April 17 will be Bold City Night at Brewer’s Pizza in Orange Park. Details to be announced.
Friday, April 27 is the 19th annual Folio Weekly Beer Festival (http://folioweekly.com/beerfest.php) at the Morocco Shrine Auditorium 3800 St. John’s Bluff Blvd. The Bold City bunch will be set up with tastings of their great brews and along with the other awesome beers, food, and entertainment.

As you can see, Brian, Susan, and the rest of the Bold City family do not believe in sitting still for long. Be sure to attend the events above and tell them you heard it here!

Beer season has definitely arrived with the proliferation of events centric to the world’s most popular beverage. In the next few months there are two beer weeks – the Jacksonville Beer Week and Craft Beer Week – each with their own bevy of events from beer festivals to tasting dinners to pub crawls. If you can’t find something to do that centers on beer this right now, you just are not trying hard enough.

Sun-Ray Theater – “Beer Wars” will be screened at 5:00 PM and followed by a panel discussion and Q&A session with local brewers Ben Davis of Intuition Ale Works and Eric Lumen of Green Room Brewing. All beers on tap at the cinema will be local only!

Engine 15 – The guys who write the Times-Union’s beer blog and column Amber Waves – Ed Stansel and Roger Bull – will be tapping their own beer named appropriately Amber Waves Amber Ale. Proceeds for this event go to the St. John’s Riverkeepers.

Brewer’s Pizza – Local IPA night featuring IPAs from Intuition Ale Works, Bold City Brewery, Green Room Brewing, and the debut of their own double IPA Landslide IPA. Plus they will have a special IPA soup and bread to pair with the hoppy brews.

Engine 15 – Jax Beer Tap Takeover! Five Engine 15 beers on tap, one in a firkin, and Old Battle Axe through the Randall. In addition to this, ten beers from the other local brewers.

Downtown Jacksonville – The Downtown Pub Crawl presented by the Springfield Brew Crew and sponsored by Intuition Ale Works. Get all the details and purchase tickets at http://www.sprbrewcrew.com. All proceeds for this event benefit The Bridge of Northeast Florida an after-school education program for disadvantaged and urban core children.

Mellow Mushroom Southside – Grand Tasting with unlimited tastings of local and Florida brews. For more information and to purchase tickets go to http://www.beerweekjax.com. All proceeds for this event go to the Daniel Foundation. Shuttle service will between Intuition and Mellow Mushroom to be furnished by the Jax Brew Bus.

Gainville’s Kanapaha Botanical Gardens will be the venue for the Hogtown Craft Beer Festival April 14. Look for a slew of Florida and local brews at the festival sponsored by the Hogtown Brewers a home-brewing club located in Gainesville. There will also be food from local resaturants and entertainment. Tickets are $35 for general admission, $75 for VIP. Proceeds benefit the St. Johns Riverkeeper and the Alachua Conservation Trust. See their website (http://www.hogtownbeerfest.com) for more info and tickets.

For the past 19 years the Folio Weekly has been throwing this beer bash and this year is no exception. Friday, April 27 the Morocco Shrine Auditorium will once again host more than 200 beers, food from local restaurants, a chicken wing eating contest sponsored by Whisky River, hookahs from The Casbah, and more fun than should be humanly possible. Tickets are $20 for general admission, $25 for VIP in advance and $5 more at the door for each.

While events for Craft Beer Week are still being firmed up, the capstone event is already planned and in the offing. The Craft and Import Beer Festival will be held May 18 at the Veterans Memorial Arena. The unbridled success of this festival has necessitated the opening of the third level of the Arena so even more great beer can be stuffed in. There are more than 35 breweries scheduled to attend with over 200 beers to sample. Proceeds for this event benefit the Southside Business Men’s Club. Tickets are $30 for general admission and $45 for VIP. Purchase tickets and get more info at: http://www.beerfestjax.com.

Top o’ the morning to you, faith and Begorrah, erin go bragh and any other Irish cliché you can think of is sure to be part of the vernacular tomorrow as the world celebrates St. Patrick’s Day. Known as the biggest drinking holiday of the year, surpassing New Year’s Eve and Oktoberfest, this holiday always brings out the leprechaun in all of us.

Pull on your favorite green outfit, swear to stay away from green beer (its just not natural!), and set out for one of dozens of St. Paddy’s celebrations throughout the area. Here’s a list to help you find some of the best parties and happenings:

Brewer’s Pizza in Orange Pak opens at noon and is offering a number of Irish and Irish-style brews (try the Pinglehead Red) and traditional Irish stew to go with the brews.

Engine 15 at the beach will be serving a selection of Irish-style brews as well tomorrow. Get there early and expect a lively crowd of revelers dressed in green to greet you.

European Street at the beach is throwing a St. Paddy’s party featuring Irish folk band Meridian. Be one of the first 100 people to arrive and receive free 20oz Killian’s Irish Beer dimpled mug. Fill your mug with $2 Killian’s and be in the running for schwag all day! The other E-street locations will feature the same beer specials and giveaways as well.

The Jacksonville Landing is offering a whole slate of events all weekend to celebrate the wearing o’ the green. On Friday night the Courtyard hosts the Hooter’s Green Bikini contest and live music from The Ride. Saturday, plan on a day of Irish music and dancing, green beer, and a green fireworks display to end the day.

Fionn MacCool’s at The Landing opens at 8:00 AM Saturday for a traditional Irish breakfast and great beer specials the rest of the day. You can be sure that there will be plenty of Irish music and fun to go with the huge selection of tap beers to be found at this great pub, too.

Green Room at Jax Beach opens at noon on Saturday and has their own version of an Irish Red – Irish Red Tide – on tap and ready to quench thirsty partiers at the beach,

Bold City Brewery will be tapping its Irish Red Ale at 1:00 PM to get the party rolling. The party doesn’t end there, though. There will also be a flip cup tournament, Irish stew from their on-site caterer, and a performance by The North Florida Emerald Society Pipes & Drums at 6:30.

Lynch’s Irish Pub in Jacksonville Beach is throwing the granddaddy of all St. Paddy’s parties with stages both inside and outside the popular pub. I suggest you get there early and wear your party shoes.

O’Brother’s Irish Pub in Riverside is hosting a street party in conjunction with Folio Magazine that will feature an outdoor food court, five bars, live music, and loads of shenanigans. The party starts at 2:00 PM and goes all night!

The Tilted Kilt will be also be putting on a street party in Tinseltown featuring live music, plenty of beer, and the best looking, kilt wearing servers anywhere in the city.

With a list like this, you should have no difficulty finding an event to attend. Just be sure to wear your green and drink responsibly.