Aardwolf to celebrate one year of great beer 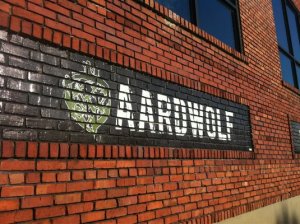 It seems like just yesterday rumors began flying around the local craft beer scene that Michael Payne, the mastermind behind Pinglehead Brewing Company, and Preben Olsen, formerly the beer byer or Grassroots Market in Five Points were collaborating on a brewery. In those days the thought was something of a dream; two great beer minds coming together to bring even more great craft beer to the burgeoning Jacksonville scene. The brewery was dubbed Aardwolf and the duo set out to take local tap rooms and beers up a notch.

Tomorrow the realization of the dream celebrates its one-year anniversary with a party at the brewery and several special one-off beers. The party is not for the brewery’s anniversary in a traditional sense, most businesses celebrate one year in operation, Aardwolf has been open for 18 months. The anniversary being celebrated tomorrow is of the brewery serving its own beers for the first time.

To commemorate the occasion, a slew of one-off and special beers have been produced including:

To keep partiers fed, On The Fly food truck will be serving their regular are in the parking lot.

Several years ago when I visited Belgium, the first beer I ordered at a bar there was Cantillion’s Gueuze. As it was a particularly chilly and rainy night, I was the only patron in the bar and the bartender and bar staff was all standing around near the end of the bar where I sat. The bartender, deducing that I was American – I think the accent gave it away – asked me if I was sure that that was the beer I wanted. “It is not like any American beer you have ever had,” he said.

Having done my research before I left the States, I knew that that was exactly what I wanted. So, I replied, “That’s the point.”

The entire staff watched as I took my first sip of the powerfully sour brew, expecting a negative reaction. What they got was a surprise because I absolutely loved it. Thus began my love affair with sour beers. Over the next nine days of my vacation I took the opportunity to drink as many sour beers as I could find. In Belgium, that is not very difficult to do.

Now, three years later, the craft beer craze is beginning to turn to sours as the next big thing. Here in Jacksonville I have had the opportunity to taste several locally-produced Berliner Weiss brews, one from Aardwolf and one from Intuition. Both were excellent with Aardwolf’s version being the more sour of the two.

One larger craft brewer that has been experimenting with sour beers for some time now is, not surprisingly, New Belgium out of Ft. Collins, Colo. In fact, the brewery has been making sour beers since 1998 when Peter Bouckaert, formerly of Redenbach inBelgium, joined the company. Rodenhbach is known for their deliciously sour beers and Boukaert wanted to bring some of that to his new home in the United States. The result was La Folie, part of the brewery’s Lips of Faith series of beers.

Just the other day I received a press release from New Belgium detailing the expansion of the wood-aged sour beer program. This is a welcome expansion to sour beer lovers like myself that is sure to produce even more delightfully sour and complex beers.

The entire press release is below:

Ft. Collins, Colo. – November 20, 2013 –  New Belgium Brewing is about to double its wood beer capacity with the addition of 32 new French Oak foeders (large wooden casks for conditioning sour beer) that will bring their total foeder count to 64. Space has been allocated, reinforced concrete flooring has been poured, and the first 12 foeders will be put in place this week. The expansion will allow New Belgium to effectively double its wood beer production in coming years. New Belgium first began making wood-aged sour beers in the form of the award-winning La Folie in 1998 when Brewmaster, Peter Bouckaert, joined the brewery. Bouckaert formerly brewed at Rodenbach in Belgium, home of the Flanders style, Rodenbach Red.

“With this expansion, we’ll get so close to that feeling I had the first time I walked through the forest of foeders at Rodenbach,” said New Belgium’s Wood Cellar Manager/Blender, Lauren Salazar. “Just knowing they’re all full of souring beer – ALL of them – is exciting. It’s a destination. Something you have to experience first hand.”

New Belgium has been experimenting with lighter and blended sour beers through its Lips of Faith program since 2003. The brewery will use this expansion to bring Lips of Faith offerings like Tart Lychee and Eric’s Ale into year round production by 2015. The newest set of oak foeders are 130 hectoliters each and come from Sterling vineyards in California. After the initial installation of 12 in November, 20 more foeders will be placed in December. Once rehydration is complete, sour beer from the current wood cellar will be used to inoculate the barrels with resident souring bacteria and wild yeasts. The beer will then age up to two years before it is blended.

On February 1st, 2014 New Belgium will hold its second annual Lost in the Woods party where guests can mingle and experience the wonders of wood beer first hand.  Check back in mid-December for details at www.newbelgium.com.

Michael Payne of Aardwolf Brewing interviewed on “I Know Jax”

Michael Payne is the co-owner and brewer at Aardwolf Brewing Co. in the San Marco neighborhood of Jacksonville, Fla. Since opening earlier this year, the Tap Room at the brewery has been getting rave reviews not only for their excellent menu of fine craft beers, but also for its sheer beauty. In this segment, I interview Michael and ask him about what it was like to get things rolling at Aardwolf and what we can expect in the future.

Be sure to tune in to “I Know Jax” every Saturday night at 8:00 p.m. and midnight on CW17 in Jacksonville for more from the Beer Guy!