Has the three-tier system become archaic?

For many, the ability to go to the local grocery store or corner store and pick up a six-pack of their favorite craft beer is merely a matter of convenience. No thought is given to how that beer got there or who put it there. It is just there, ready to be picked up, purchased and consumed. But, the story of how craft beer gets from brewer to grocer is fascinating and, at times, frustrating.

As America awoke from the long, dark nightmare that was Prohibition, the federal government left the regulation of alcohol to the states. Lawmakers wanted a way to prevent the proliferation of “tied houses” or saloons that served beer from only one brewery. Before prohibition, it was common for breweries to provide loans to bar owners for furniture and bar equipment under the stipulation that the bar only serve their beer. Along with the loan, breweries applied pressure to the barkeep to sell more and more beer, often leading to overconsumption and drunkenness of patrons. Add in the specter of the mob-controlled distribution and speakeasy networks during Prohibition and it was apparent a change had to be made.

These fears led to the adoption of what is known as the “three-tier system.” This set of laws separate brewers from retailers through a middle-man or distributor. In essence, the system requires brewers to sell their beer to a distributor who then sells the beer to retailers like bars, restaurants and stores. Since the federal government left the states to regulate alcohol as they saw fit, the system is not consistent across the nation. But, for the most part, the system prohibits breweries from owning distribution firms or selling directly to retailers. In Florida, breweries are allowed to operate tap rooms where they are allowed to sell their own beer to guests on a limited basis.

But, in an industry overflowing with choices, brewers can find it difficult to get shelf space or tap placements if their beer is sub-par. For this reason, many distributors recommend breweries fine tune their beers in their tap room before releasing them to distribution.

“A tap room’s a beautiful thing,” said David Rigdon of Jacksonville distributor Champion Brands to a group of brewery owners at the recent Florida Brewers Conference. “Use your taproom to develop your beers. At the end of the day, though, it’s the old push pull. We push your brands, but buyers have to pull them.”

The system is not without its critics. Some breweries, particularly smaller ones, contend that self-distribution would allow them to ensure their beers stay on tap thereby helping both the brewery and retailer make more sales. They cite the example of a bar that blows a tap of their beer on a Friday evening. If there are no self-distribution laws and only the three-tier system, the bar must wait until Monday when the distributor is open for a new keg. With self-distribution, the brewery could deliver a keg directly.

As is common among older alcohol laws, a close look at the system is needed to fully understand what still makes sense. And, as we all know, the wheels of government turn slowly. But, for now, raise a glass of your favorite brew to the fine men and women employed by your local distributors for they truly do deliver happiness.

But, some brewers, particularly small and local companies, are discovering that the three-tier system is holding them back. 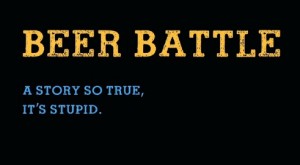 On a more serious note, readers of this blog are familiar with the fight going on in Florida over growler size. For those who are not up to speed on this issue, in a nut shell a group of mega-brewery beer distributors have been maneuvering to block all attempts by Florida’s craft beer producers and community to legalize 64-ounce growlers.

State law in Florida currently allows both 32-ounce (one quart) and 128-ounce (one gallon) growlers. But, because of “safety and public health” concerns the state — under pressure from powerful lobbyists from the above mentioned distributors — has torpedoed all  challenges to the current law.

The fight has been the subject of many articles and news accounts and is now surfacing as the topic of a short documentary shot by Florida State University student, Hunter J, Truman. Truman shot the film for a school project and includes interviews with Joey Redner of Cigar City Brewing Company, Byron Burroughs of Proof Brewing Company and Josh Aubuchon, lobbyist for the Florida Brewers Guild.