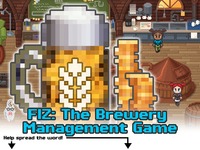 For all those who ever dreamt of starting their own brewery, Bit By Bit Studios has developed a new iOS and Android game app called Fiz that provides the experience. The new app, available in both the Android Store and iTunes, takes players from a small garage brewing operation to a world-renowned brewing operation.

The game was the brainstorm of Sean Sanders. The idea came to him while he was attending a beer festival where he fantasized about being behind a booth serving his own brew. So, after quitting his job at a studio, Sanders began development of the game in July 0f 2013. A few months later Kelly O’Donnell joined the project as artist. The duo launched a Kickstarter campaign to raise funds for the Android and iOS versions on Feb 8, 2013, which successfully funded March 11, 2013. After months of development and a few setbacks, the game released December 12, 2013.

The game boasts a host of features including:

The game starts out with the player naming their brewing company and choosing from a host of several characters both male and female. Next, the game takes the player through a tutorial to acquaint them with the game controls and tasks including creating a recipe, assigning jobs and craft points that improve beer output. Mastery of the game requires careful management of many attributes.

Bit By Bit Studios is an American independent game studio focusing on tools and mobile game development. The company was founded by Sanders in June 2012. That month, BXB released its first product: Virtual Controls Suite – a set of customizable control components for touch screen devices, available on the Unity Asset Store and via Bit By Bit Studios’ website. As of January 1 2013, Virtual Controls Suite has sold over 200 copies in 6 months and has appeared several times on the Top 10 Paid and Top 10 Grossing list for the Scripting category in the Unity Asset Store.

The game costs $1.99 to download in the app stores and the company promises to keep players abreast of new developments on an every-other-month basis.