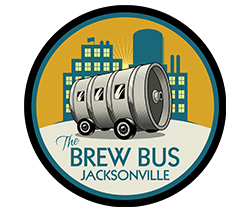 In cities around the country craft beer is becoming a force to be reckoned with. More and more, cities are realizing that craft beer can be a source of pride to residents and a means for advancing tourism. At the same time, beer enthusiasts are always looking for ways to enjoy several beers from several different breweries in a single day. Enter the answer to the prayers of local and out-of-town beer aficionados alike: The Brew Bus.

Born in Tampa, the Brew Bus is the brain child of Anthony Derby, the Brew Bus began as a private charter service and quickly grew to offer weekly public tours. The idea for the service sprang from Derby’s college days at the University of Colorado. After attempting to visit three Colorado breweries on his own in one day, he realized that there was a need for a transportation service that caters directly to others like him that were interested in craft beer.

Derby reached out to his mother, Toni Derby, president of Cigar City Brewing Company in Tampa, and pitched the idea. Shortly after that, in 2011, the first Brew Bus tour launched in Tampa with a load of craft beer lovers happily on board. Later, after graduating from college, Derby took over operations of the Brew Bus company and founded Brew Bus Brewing Company that produced his own line of beers for distribution in Florida, Pennsylvania and New York.

“When we were identifying a new city to launch our tours in, the choice was easy.” said Derby. “With attractions like the Jax Ale Trail, the many award winning breweries, not to mention new ones set to open this year, Jacksonville is a really exciting place to be right now.”

To welcome the Brew Bus crew to Jacksonville, World of Beer on Southside is hosting a launch event Wednesday, April 22 from 6:00 p.m. to 9:00 p.m. Last Stop IPA and Double Decker English Style Porter will be available on tap along with Rollin’ Dirty Red in c ans. The following night, Thursday, April 23, the Brew Bus gang will visit Engine 15 in Jacksonville Beach. E15 will feature several Brew Bus beers on tap at the event.

Brew Bus tours will begin in Jacksonville on Friday, April 24 with Engine 15 and Bold City Brewing Company acting as the starting points. The Brew Bus offers public brewery tours and private charter packages that visit all of the local breweries in the Jacksonville Area. The Brew Bus offers multiple all-inclusive tours each week where passengers can sample beer and get a behind the scenes look at brewery operations.

“We’re not just an ancillary tourism business,” said Derby. “We’re here to bring new business to our local breweries and introduce people to craft beer. We really want to see the craft beer scene in Florida continue to grow.”

The company will offer two types of tours initially in Jacksonville; The Sampler Tour and The Full Pour Tour.

The Sampler Tour includes visits to three local breweries in 3.5 hours. Tickets include two 4-ounce samples at each brewery you visit plus a Brew Bus Brewing beer and additional samples on board. This experience leaves on Friday evenings and costs $45 per person.

The Full Pour Tour takes riders to three local breweries in five hours. Tickets include a brewery tour, round trip transportation, two Brew Bus Brewing beers on board, and a pint at each brewery you visit. The Full Pour Tour occurs on Saturday afternoons and costs $55 per person.

To book your trip or learn more about The Brew Bus, visit Jacksonville.brewbususa.com.

Jax Beer Week comes to a close today with a wrap party at Grape & Grain Exchange featuring special brews from many of Jacksonville’s best breweries.

In addition to the tastings, 6-ounce pours of special release beers from the local brewers will be available for $3 to $4. These special brews include:

For those who live at the beaches and would rather let someone else drive to San Marco, the Jax Brew Bus is offering freeshuttle rides from Engine 15 Brewing Company to Grape & Grain Exchange. Pick up times are at 5:30 p.m. and 6:30 p.m. Rides back to Engine 15 at 9:30 p.m. and 10:30 p.m. Rides are first come, first served.

A release from the brewery president stated:

“Today is the day that we launch Brew Bus Brewing! Formally Tampa Bay Brew Bus Beer, we intend to separate our successful Brew Bus tour program from our craft beer line of cans to allow for further success for both branches of our business.

Our first can release is our Last Stop IPA. This new brand was well received back in August when it was first released in kegs. A recipe by Josh Brengle, lead brewer at Cigar City Brewing in Tampa, FL, this hop bomb is brewed with Magnum, Centennial, Columbus, Amarillo, Simcoe, and Citra hops. Clocking in at 7.2% this highly drinkable, paler IPA lends towards heavy doses of citrus and tropical flavors. Available distribution in cans and kegs with JJ Taylor Florida Distributing and Brown Distributing.

During the next month you will see our other brands being released in cans, including: Rollin Dirty Irish Red Ale, Are Wheat There Yet? American Wheat Ale, and our all-natural blueberry wheat ale called You’re My Boy, Blue.

We will continue to support our local community wherever we have a Brew Bus location. It has always been my mission to further promote the craft beer movement while increasing the economic impact to local breweries, craft beer bars, and brewpubs.

I am excited to release a brand that celebrates the growing craft beer community in Florida.”