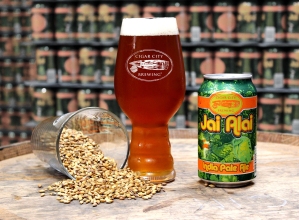 Tampa’s Cigar City Brewing Company is a true Florida success story. Coming from humble beginnings and crafty outstanding brews, they have grown to become one of the best-known breweries in Florida. Their annual Hunahpu’s Day Craft Beer Festival and bottle release attracts beer-lovers and brewers from around the country and even the world.

Now, the company is expanding its domestic distribution to North Carolina to grow its U.S. footprint and bring Florida-style brews like flagship Jai Alai IPA to the beer fanatics of the Blue Ridge Mountains and beyond.

Get all the distribution and launch event details in the official press release below:

Market launch events will be taking place across North Carolina from March 21st thru
March 29th with numerous Cigar City Brewing representatives present, including Cigar
City Brewing’s El Lector Neil Callaghan and Brand Manager Lucas Widrick. These events
will be incredible opportunities for North Carolina’s craft beer fans to enjoy some of the
first CCB beer to be shipped to the state and to learn about Cigar City Brewing’s brand and
it’s award winning beer from the people who know it best.

During this time of year it is not uncommon for breweries to release their heavier beers. For instance, last month Funky Buddha Maple Bacon Coffee Porter was release to great fanfare at the brewer’s South Florida brewery. Closer to home, this weekend Jacksonville brewery Intuition Ale Works is releasing its annual Underdark Imperial Stout and next month Tampa brewery Cigar City will host a beer festival where they will release their Hunahpu’s Imperial Stout.

All three of these release events draw heavy beer fans from all over the state and region. Fans stand in line for hours to get their hands on their allotment of these highly-coveted and extremely-limited bottles. Often, the hearty souls share bottles of other high-end brews among themselves as they wait.

Scoring a bottle of these brews is akin to catching a home run baseball at Camden Yards, it is something beer aficionados treat as a badge of honor. Many collectors have multiple vintages of the beers aging in their beer cellars and bring them out only on special occasions.

But, what happens if you cannot make one of these bottle release extravaganzas? Well, there is always the beer trading circuit. If a collector has a bottle that is desired by another collector a trade may be negotiated. Or, if a taste of the beer is enough to satiate craving, bottle shares are common within the craft beer community.

Another way to score a taste of these rare beers is to watch for tasting events at local bars and bottle shops sponsored by the breweries. For instance, if you were unable to make the pilgrimage to South Florida for the Funky Buddha Maple Bacon Coffee Porter release event last month, your chances of tasting the brew are not lost. In a recent post on its website, the brewery has announced that the beer is going on tour throughout Florida.

Over the next few months you will likely see several tastings of Underdark pop up around Jacksonville and other markets where Intuition beers are sold. Hunahpu’s though is a rare find on tap. It may show up in one or two places after the bottle release, but traditionally it is pretty hard to find.

So, if you are after these big beers, it is best to try to make it to a bottle release. But, if that is not possible, ask around at local beer pubs about bottle shares and watch for special tappings. For lovers of big beers, the brews discussed in this article are more than worth the effort to find them.

A month or so ago, Black Sheep Restaurant tried to hold a unique beer dinner at their rooftop dining area. Unfortunately, Mother Nature had other plans and torrential rain forced the cancellation of the event. So, to make it up to those beer lovers who missed out, the restaurant has rescheduled the event for Wednesday, September 16 between 6:00 p.m. and 9:00 p.m.

The concept: pit two legendary breweries against each other in a beer pairing throw down.

The beers will be presented by representatives of each brewery and are chosen to highlight the dish they are served alongside.  Both Cigar City and Stone are known for their assertive and flavor-forward brews and for this shoot out, they have brought the big guns. Heady brews such as Stone Hifi Lowfi Blended Ale and Cigar City Seasonal Creep are featured prominently.

In addition to the elaborate food to be served, the service itself is somewhat unique. Instead of a seated dinner, diners are encouraged to arrive when they feel like it anytime during the dinner’s hours. Dishes will be served reception style on diner’s time schedules, not in a rush as is often the case at beer dinners.

Tickets for the event are $40 (not including tax and gratuity) and are available from the restaurant. Call (904) 380-3091 for more details and to purchase a ticket.

Kitchen on San Marco (KOSM), as I reported here earlier , takes both beer and food seriously. And, in what promises to be one of the first of many beer dinners, KOSM and Cigar City are teaming up to bring beer-lovers a dream night of beer and food pairings. While the food menu is still in development, the beer list is impressive.

Guests can expect to be greeted with a welcoming pint of Cigar City Cider from 6:00 p.m. to 6:30 p.m. Dinner begins at 6:30 with six courses created by Chef Ryan built around eight-ounce pours of the following six beers:

Soon, guests aboard all Florida-based Carnival cruise ships will be able to get a taste of the Sunshine State’s craft beer industry. On July 13, the cruise company plans to begin serving cans of Cigar City beers as part of the drinks offered to on-board guests.

Ships sailing from the five Florida ports served – 13 in all – will serve Cigar City Florida Cracker Belgian-style White Ale and Invasion Pale Ale. It is projected that as many as 100,000 cans of the brews will be served in the first year.

According to an article in yesterday’s Tampa Bay Business Journal, the partnership began as a conversation at an event in South Florida. Vice President of beverage operations for Carnival Eddie Allen approached a sales person at the event and within a month a deal was struck.

A launch party for the new partnership is planned for July 13 aboard the Carnival Legend at the Port of Tampa.