6 tips you must know to score GABF tickets

To many beer-lovers, the Great American Beer Festival is the end-all, be-all of beer festivals. It is the epitome of what a beer festival should be and beer nirvana all rolled into one massive event. It is also a very difficult ticket to purchase and, once a ticket is procured, an even more difficult event to navigate.

With just  five months to the 2017 festival, this year’s event takes place October 5-7, will need a plan for attending this event. Tickets go on sale to the general public August 2 at 8:00 a.m. Eastern Time through Ticketmaster.

Last year, tickets to the GABF 2016 sold out in just one hour and seven minutes. That means you have to put some serious effort into getting your entry media. Fortunately, there are several ways you can give yourself an advantage over the unwashed masses.

If, after doing all of the above, you still do not manage to grab tickets, there are secondary markets. Sure, you’ll pay more for the tickets, but if you really want to go, that may be your only outlet. Just stay away from Craigslist and any other unverified ticket agency. You do not want to be the guy that shows up at the door with a counterfeit ticket and be denied admission.

Watch for more articles on how to get the most out of your GABF experience.

The drive from Denver to Ft. Collins is about an hour long, but is a necessary journey for any true beer lover. Originally called Camp Collins, the outpost was established in 1862 to protect travelers and settlers along the Colorado branch of the Overland Trail. Just two year later, in 1864, a flood destroyed the camp and the U.S. Army decided to reposition the settlement and call it Ft. Collins. Today, the city is known for its beer culture and as the home of several of Colorado’s most noted breweries.

While at the Riverside Craft Beer Festival, I mentioned to the local New Belgium representative that I was considering a visit to my daughter in Denver. He offered to set up a tour of the brewery in Ft. Collins if I made it out there. So, when the plans were set, I took him up on his offer. And, am I glad I did.

When you come up the street and the brewery comes in to view the first thing that comes to mind is that it is a very popular place. The huge front lawn of the brewery is always full of visitors playing corn hole, lounging on blankets and playing Frisbee all while sipping New Belgium brews.

The building itself is at once modern and traditional with a three-story high roof over the entrance, plenty of glass and lots of warm reddish brown wood paneling. It evokes a feeling of a mountain cabin while also displaying a modern design sensibility. The mix of old and new is thoroughly pleasing to the eye and immensely inviting.

Upon entering, visitors are greeted by a tour check-in desk in front of a buzzing hive of activity that is the brewery’s taproom. The design esthetic carries from the outside in to the taproom with more warm wood and a huge glass wall that shows off part of the brewery in the back. The bar stretches from one end of the main room to the other and a chalkboard behind it announces the beers currently available for tasting. On the left is another smaller tasting room with another bar and tables for sitting and enjoying pints.

At the check-in desk, we told the hostess our names, she checked our IDs and told us – my wife and daughter were along for the tour — she would let our tour guide know we had arrived. Within moments, Penelope Gilland, a long-time employee owner at New Belgium, appeared and ushered us to the bar for beers to drink while on the tour. I chose a raspberry treatment of their sour base beer Oscar – it was delicious, by the way – and we were on our way.

Our first stop was just around the corner from the bar, but it was a very important first step and set the tone for the tour. In a small hallway, mounted to the wall is a display case that holds the relic upon which the brewery was built, the actual beer journal used by Jeff Lebesch on his beer vision quest through Belgium in 1988. In that notebook, Lebesch jotted down the original recipe for Fat Tire the company’s flagship amber ale.

As Penelope explained the origins of the company and how, after just a few years of homebrewing, Lebesch decided to sell his beers to local Ft. Collins bars it became apparent the pride she, and every other New Belgium employee I have ever met, have in their work. The idea that a brewery that began in a basement with self-distribution by his wife in the family station wagon could flourish to become the company that is now the nation’s fourth largest craft brewery in the United States is astounding and wonderful at the same time.

Next, we walked over to the brewing area in what has been called the cathedral. It is called that because of the vaulted ceilings that look every inch of 40 feet tall with exposed wooden beams, high windows allowing for abundant natural light and the length of the room. It looks like a church with huge, 100-barrel kettles rising majestically from the floor and running down the middle. Each kettle ringed by a story that is related through mosaic tiles on the floor around them. The room is breath-taking, immaculately spotless and a real show-place for New Belgium. Indeed, several weddings have been held in the room lending even more weight to the cathedral nickname.

But, impressive as the cathedral was, the fouder (pronounced food-er) room was my favorite. Fouders are large wooden fermentation tanks used to age sour beers. New Belgium’s fouder room, known as “The Woods,” holds 64 wooden vessels of many shapes and sizes. Each contains a different living beer in varying stages of completion. 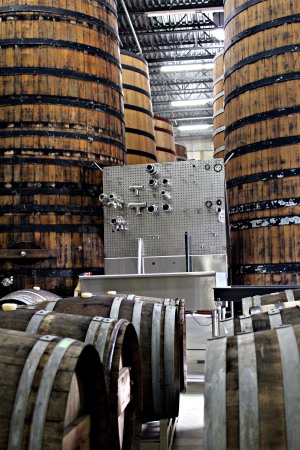 Walking through The Woods is sort of like taking a trip in time to an age before brightly polished stainless steel fermentation tanks and high-efficiency brewing. It harkens back to a time when a brewmaster needed to know how to control a beer’s fermentation process is closely as he watched the brewing process. It sort of felt like being in Belgium again, where breweries such as Cantillon still make lambic beers through spontaneous fermentation using the yeast and bacteria in the air and the wood of the fouders to bring their beer to life.

After our walk in The Woods we returned to the taproom for a few more cold beers and to talk about our experiences on the tour. We enlisted the help of another “Mothership” – the name New Belgium insiders have given to the main brewery – visitor for a group picture with our guide, Penelope and mulled our next move.

The consensus was overwhelming that New Belgium would be a staple for future visits to Colorado and that of all the brewery tours we had taken together, the Ft. Collins New Belgium tour was among the best.

New Belgium launching in Florida and around the country

The long awaited entrance of new Belgium into the Florida craft beer market is just days away. On Monday, July 29 the Ft. Collins, Colo. brewer will enter the market with a splash by hosting a week’s worth of launch parties all around the Jacksonville area.

But, ours is not the only state New Belgium is conquering. Along with Florida, the brewery has recently announced that they will launch in Utah and Delaware in the U.S. and British Columbia in Canada.

“[Delaware] will mark our 33rd state of distribution, once Florida opens up later this month, and it’s exciting for us to be inching our way into more and more areas in the Northeast,” said New Belgium Brewing Sales Co-Pilot, Brian Krueger. “We definitely look forward to having a New Belgium beer with our friends in The First State.”

In Delaware New Belgium faces stiff competition with the state’s beer super star Dogfish Head. But, the two breweries have enough differences that it is certain that both can coexist happily.

Utah, which shares a border with New Belgium’s home state of Colorado, has been an elusive target for the brewery.  “Since we’re based in Colorado and share a border with our friends in Utah it only makes sense that we can now share a beer with them as well,” Krueger said. “We are really excited about some of the recent legislation in Utah that gives us the peace of mind we need to ensure the quality of our beers will be held to our high standards”

British Columbia marks New Belgium’s first foray into exports. The brewery will officially kick off its entry into the Canadian market at the Great Canadian Beer Fest on September 6, 2013.

Back home, if you have not had the opportunity to sample New Belgium’s brews or if you are a fan and just want to support the brewery’s roll out in North Florida, check out the list below.