SweetWater 420 to be served on Delta flights to NYC 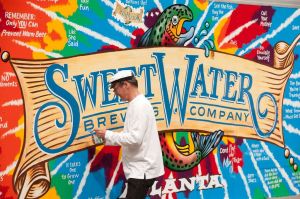 If you are flying from the Southeastern United States to just about anywhere else chances are you will have a stop at Atlanta’s Hartsfield-Jackson International Airport. Located seven miles south of downtown Atlanta, Hartsfield has had the distinction of being the busiest airport in the world since 1998. Nearly 95 million people pass through the concourses of the airport every year to board nearly 1 million flights. By any accounting, that is a lot of traffic.

Hartsfield-Jackson is also the central hub for one of the nation’s largest airlines; Delta. With almost 1,000 flights per day Delta ushers over 59% of their passengers through the airport. And it is because of those numbers that Delta’s new partnership with another Atlanta icon; SweetWater Brewing Company.

In an announcement made through Facebook in Thursday, March 27, SweetWater announced that cans of their flagship 420 Pale Ale will be stocked on all Delta flights bound for LaGuardia Airport in New York beginning April 1, 2014.

Prior to just a few months ago, it was impossible for SweetWater’s beers to be made available on flights because they were only packaged in glass bottles. With the higher precautions do to the events of 9/11, glass and airplanes just doesn’t mix. But, cans are perfectly acceptable for aircraft.

420 is one of the first craft beers to make it on to Delta’s in-flight menu and the brewery could not be happier. In an article in the Atlanta Business Chronicle, SweetWater founder Freddie Bench said, “Our new cans eliminate the glass restrictions that previously held us back from offering our beer in great spots like airplanes, stadiums, beaches and more.”

In March, the brewery began canning 420 using a special can-conditioning process that produces a stable beer with a longer shelf life. The process is similar to the used by many brewers to “bottle-condition” beers. A small amount of sugar and yeast is added to the bottle before it is sealed, as the yeast eats the sugar it also removes any oxygen that may be in the can. By removing oxygen, the bane of all beer, the brewery extends the beer’s shelf life.

Delta will also serve SweetWater 420 on flights from Atlanta to Denver April 7-9 during the Craft Brewer’s Conference.