Last year my life was forever changed. I was arrested for DUI as I was driving home from a beer festival. As a long-time beer blogger and advocate of knowing when to say when, this was devastating. Over the next few weeks, I will be telling my story in hopes that my experience will resonate with my readers and deter them from taking any chances when their ability to drive after having a few beers may be impaired.

You may read this series from the beginning here. 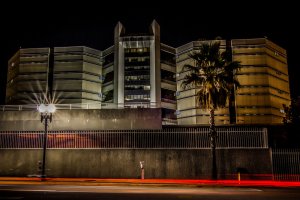 The echoes of the voices of incarcerated men slowly faded as I was escorted down the same hall through which I had entered the jail. The guard did not say a word, just pointed to where he wanted me to go. Though I knew I was on my way out, the walls were still daunting, cold and unforgiving. The only difference between this walk and the walk in was that this time I was not in chains.

After minutes that seemed to stretch into hours, we reached an elevator. The guard punched the down button and, when the car arrived, motioned for me to get in. As the door closed the guard turned away and headed back to the cell block. There was no goodbye or good luck wishes, I was just another number that was to be processed, filed and pushed to the next step in the judicial process.

When the elevator doors again opened I walked out to a room with only one exit and a thick window with guards moving around behind it. A speaker squawked to life and a male voice demanded my name and destination.  After satisfying his demand, I was told to go to the first window on the left and buzzed through the door.

The window resembled a ticket window at a movie theater except for the uniformed guard on the other side. As I approached I could hear the guard joking with another, unseen guard before he turned his attention to me.

“Show me your bracelet,” the guard ordered and I presented the heavy plastic bracelet that had been put on me at booking. The bracelet had my name, inmate number, description, a barcode and a small photo of me on it. The guard scanned the barcode and looked at his computer.

“Discharging, huh?” He said as if surprised. “Wait here while we get your property.”

After a few moments he returned with a brown bag – the same bag that had been given to me the night before – this time it was full of my own clothing instead of the orange scrubs worn by prisoners in the jail.

Quickly I shed the scratchy prison attire and slipped back into my own clothes. It was a relief after nearly 24 hours in the scrubs and I began to feel somewhat human again.

Upon my return to the window the guard informed me I would have to sign my bond papers and pointed me to an office across the hall. As was the case throughout my stay at the Duval County jail, I had to wait for someone to get my paperwork ready in a drab, dimly lit room with only a metal bench to sit on. When finally my name was called, I was told where to sign and given copies of my release papers as well as my bond papers. I was then told to exit through a door at the far end of the hall and that there was a phone I could use to call a ride on the other side.

As the door closed behind me I could see the outside world for the first time since the previous evening. I stopped and made a call to my wife and she told me she would be there in just a few minutes. Stepping through the doors and into the night air was cathartic; it was as if a tremendous weight had been lifted from me only to be replaced by another.

When my wife arrived, I got into the car and immediately broke down. The emotions that I had held pent up since the accident flooded out uncontrollably. Part of me knew that it was normal to react this way, but another part told me I still had a long way to go before this ordeal would be over.

The next morning I began the search for a lawyer to represent my interests and guide me through the complex process set out by the courts. In all I interviewed three attorneys, one declined to take my case, one was well, scary and the third won my business by being straightforward and honest.

The first attorney office I visited was that of an outspoken and prominent DUI lawyer in Jacksonville. His commercials insisted he was the best hope for those in situations such as mine and that his was the only firm that could keep DUI offenders from further humiliation by the system. Upon entering the barrister’s office I immediately realized we had met about a year early.

On my way home from dinner out one evening, I was traveling west on J. Turner Butler Boulevard toward the northbound exit to I-95. Ahead of me was a car that had swerved from the far left lane across three lanes to the exit just in front of me. The car left the pavement of the exit ramp and careened through the grass before correcting and getting back on the ramp. I called the police and followed the drunk driver until they caught up with her and stopped her.

A few weeks later I was called to testify before the Florida Department of Highway and Motor Safety. The Lawyer whose office I was now in was the lawyer representing the drunk driver I had turned in.

We talked for a few minutes and I left knowing I would have to continue my search for an attorney.

The second lawyer I interviewed had me alarmed before he even uttered a word. His office was festooned with an assortment of military hardware that would have been the envy of an Armed Forces museum. There were guns, grenades and uniforms in every corner. When he did speak after hearing my story he informed me that I should prepare for the very real possibility of doing more jail time.

I could not get out of his office fast enough.

Finally, on the third attorney interview, I entered the office of Jason Porter and was immediately set at ease. We went over the case and explained how things would proceed. He was thorough and did not sugar coat things, but he did assure me that he thought we had a winnable case and that he would fight hard to keep this incident from haunting me the rest of my life.

The first order of business would be to deal with the Florida Department of Highway and Motor Safety.

To read the next part of this series, click here.

The Jax Beer Guy has partnered with the UBER car service in Jacksonville. Because of this partnership, you can receive a $20 credit for your first ride by simply using the promo code “l2jkr” when you register for UBER on your smartphone.