Beer mug can call a cab after a night out 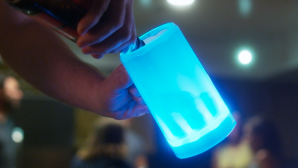 As the popularity of craft beer continues to escalate, it was inevitable that technological advances in how to drink beer would make their way in to the collective beer consumption scene. Enter the ePint, a geewiz beer mug that boasts LED lights, a bluetooth connection and the ability to signal your barkeep that your mug is empty. The mug is the creation of Xtreme Tech a Los Angeles, California based tech company that is raising money via Kickstarter to put the vessel into production.

Among the many features of the mug beyond just holding beer are Internet connectivity, the ability to sense when it is empty, the ability to light up when your favorite sports team scores and built in drinking games. Most of the fun of the mug comes from the built in, interactive LED lights that pulse and change color depending on what the mug is signaling.

“The ePint is hospitable enough to know when you need a refill,” says the company’s promotional video. “And responsible enough to contact a cab when the party’s over.”

The device comes with a rechargeable battery that, according to the company, “…will last longer than you do at a party.”

The ePint is available to pre-order via Kickstarter from $30.

The gadget is expected to ship in April, if the company meets its $50,000 goal.