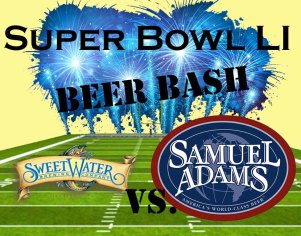 With the Super Bowl just a few days away, the smack is running fast and hard. The New England Patriots will battle the Atlanta Falcons for the ultimate title of Super Bowl LI Champions. But, there is another rivalry brewing between Atlanta’s SweetWater Brewing Company and Boston’s Samuel Adams brewing.

It began last week when Browns Bridge Exxon Station in Gainesville, a suburb of Atlanta, posted a sign on their beer cooler informing buyers, “We will not be selling any Sam Adams beer until after the Super Bowl!”

The statement was followed by the hashtag #riseup.

To spread the word even further, store manager Viral Chhadua, posted to the store’s Facebook page that they would be promoting local, Atlanta brewery SweetWater.

“We’re promoting your ATLANTA based beer instead,” Chhadua wrote. “So if you guys want to send us to the Super Bowl we wouldn’t hate ya for it.”

The gas station’s ban of Sam Adams went quickly went viral and sparked a good-natured Twitter war between the two breweries. In the end, a wager was struck with the loser agreeing to rename one of their beers to honor the winning team.

@sweetwaterbrew Your joke’s falling flat. Better Belichick yourself before you wreck yourself.

.@Sweetwaterbrew Sounds like you need #OneMore employee to help with production…Let’s up the ante – loser wears winning team’s colors? #SB51

According to a report on WSB-TV 2 in Atlanta, Chhadua says the response has been overwhelmingly positive.

“It’s been positive from the Falcons’ fans and of course not so friendly from the Boston fans, but they’ve been good sports. They’re laughing at it and enjoying the banter,” he said.

“We know what it’s like to be superfans of your hometown football team, so there’s no hard feelings,” Koch told the Boston Globe. “This isn’t the first time we’ve been banned before the big game (ahem, four rings), and we hope it won’t be the last. We’ll be toasting our hometown team with Sam Adams alongside New England fans everywhere.”

Who will come out on top and win bragging — and beer naming — rights? Only time will tell. One thing is certain, fans on both sides of the game can look forward to a good game and more smack talk tweets in the next few days and during the game.