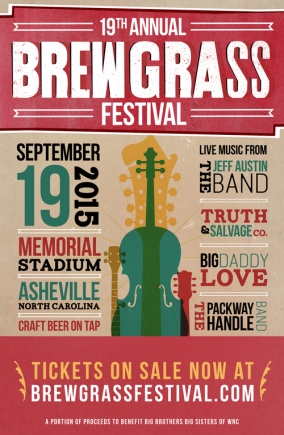 In the 19 years since its inception, the Brewgrass beer festival in Asheville, N.C. has made quite a name for itself. The combination of exceptional craft beers, bluegrass music and clear, cool mountain air makes it a magical experience for all who attend. And, as is often the case with beer festivals, the proceeds benefit a very good cause.  Brewgrass Festival is the largest fundraiser for Big Brothers Big Sisters of Western North Carolina. Proceeds from this event go directly to this great organization.

Billed as Asheville’s original beer festival, this year’s festivities will take place Saturday, September 19 at Memorial Stadium in Asheville. This year’s festival will feature over 50 brewers from local, regional, and national breweries including Catawba Brewing Co., Asheville Brewing Company, Rogue Ales, The Duck-Rabbit Brewery, Samuel Adams, and more. Organizers advise those interested in keeping up with the list of participating brewers to visit their website as the list changes often. But, at the time of this article the list included:

But, the beer lineup is not the only reason to attend the festival. Organizers have also announced an impressive lineup of musical talent for fest-goers to enjoy along with their brews. Jeff Austin Band, featuring mandolinist Jeff Austin formerly of Yonder Mountain String Band with band members Danny Barnes, Ross Martin and Eric Thorin, will headline the event. Attendees will enjoy additional performances from Truth and Salvage Co., Big Daddy Love, and Packway Handle Band. Music begins at 1 p.m.

Tickets for the festival are $55 and may be purchased at: http://www.brewgrassfestival.com/tickets-1/.

It’s that magical time of the year when men don their lederhosen and women doll up in their dirndls. Yes, Oktoberfest draws near and the folks at Home Brew West in Ireland have put together an infographic that provides you with all you could ever want to know abut the world’s largest festival.

At a recent kick-off party for the Downtown is on Fire initiative, Intuition Ale Works debuted their Smoke IPA. But, if recent wins by the brewery are any indication, it seems that they are just as on fire as downtown. For the second year in a row, the brewery has been tapped as the Official Brewery of One Spark, billed as ‘The World’s Crowdfunding Festival.’

Intuition will be brewing two limited release beers for One Spark 2014 instead of just one like last year. According to a press release from the brewery, demand for last year’s One Spark Kölsch was so high that the decision was made to add another brew to the lineup this year.

In addition to One Spark Kölsch, a smooth German-style ale with mild hops and a crisp finish inspired by the kölsch beers of Cologne, Germany, Intuition will brew One Spark Alt. The new beer is inspired by the altbiers brewed in Dusseldorf, Germany and is an amber malty brew with a smooth finish. Interestingly, the beers are examples of the two ale styles produced in otherwise lager-dominated Germany.

Intuition Ale Works founder Ben Davis decided to create the second brew due to the wildly successful nature of the One Spark event last year as well as the enthusiastic acceptance of One Spark Kölsch. Of the event, Davis said, “People can use One Spark to directly support the ideas of others. As a Jacksonville native and small business owner, I know that supporting our downtown core with events like these and contributing to the spirit of innovation will be vital to our city in years to come.”

One Spark is a five-day event that connects people with great ideas to the resources they need to bring those ideas to fruition. The festival runs from April 9 to April 13, 2014 in a 20-square-block, multi-Venue gallery in downtown Jacksonville, Fla.  Artists, entrepreneurs and innovators display their ideas for all to see and vote on. Attendees vote on the projects they like the best to distribute nearly $300,000 in funds.

Davis has proven to be an outspoken and unwavering downtown advocate with his involvement in the afore mentioned Downtown is on Fire campaign. His Smoke IPA was inspired by and created exclusively for downtown Jacksonville only as part of the movement and should be appearing on tap at bars and restaurants in the city core now. For a list of locations serving Smoke IPA, go to the Downtown Marketing Collaborative’s website: http://www.downtownisonfire.com/promotions.

One Spark and One Spark Alt will be available on draft at the One Spark Festival in the San Marco Dining District Food Village and at beer kiosks set up throughout downtown Jacksonville during the festival.