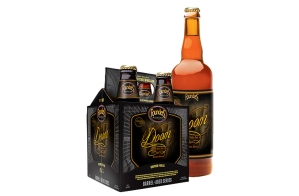 Founders Brewing Company is best known for its Kentucky Breakfast Stout and the fanatical following it garners. But, the brewery’s Barrel-Aged Series has been grabbing attention lately, too. Along with Frootwood, a cherry ale, and KBS, Founders has released Backwoods Bastard, a Scotch ale. Now the brewery has announced that it has revived its 2013 IPA, Doom and has had it hidden away in Bourbon barrels.

The barrel-aged version of Doom will be available in distribution by the end of May.

See the official press release below for more details.

GRAND RAPIDS, Mich., April 12, 2017 – Founders announced today that they will release Doom, an imperial IPA aged in bourbon barrels, as the next release in the Barrel-Aged Series.Founders last released Doom in 2013 as part of the Backstage Series of beers, and its return is highly anticipated.

Doom is the third release of 2017 in the brewery’s esteemed Barrel-Aged Series, preceded by Frootwood and KBS. In addition to Backwoods Bastard, there are two remaining beers yet to be announced in the series this year.

Doom will be available in the taproom beginning on May 12 with remaining states seeing it shortly thereafter. Doom will have a suggested retail price of $14.99/4-pack 12oz bottles and $11.99/750mL bottle.

“Imperial IPA and barrel-aging – two of our greatest strengths coming together to create the masterpiece we call Doom,” said Co-Founder and President, Dave Engbers. “This is a huge beer with a big attitude. We are so happy to bring this beer back for those who have been vocal in asking for its return and we look forward to introduce it to those who haven’t yet had the opportunity to try it.”

Founders will announce the remaining two releases in the Barrel-Aged Series later in the year. 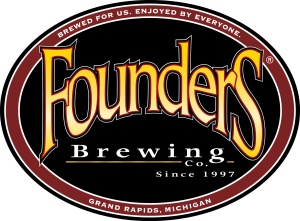 One of the best known breweries in the world – indeed, a brewery that has two beers on the top 10 best beers list as ranked by BeerAdvocate.com in 2013 – is not named what you think it is. If you guessed Founders Brewing Company, you are both right and wrong.  Early beer bottle labels featured a historic black-and-white photo of four local brewers sitting on a large wooden beer barrel. The word “Founders” appeared above the photo. This was homage to the original brewers and breweries of Grand Rapids, Mich. located on Monroe Street, formerly known as Canal Street. Thus, Founders Brewing Company is actually named Canal Street Brewing Company. The brewery does business as Founders due to a misunderstanding of that original label.

But, there is no misunderstanding of the reverence beer-overs have for the Michigan brewery. And, to pay their own respect, Whole Foods on San Jose Boulevard in Jacksonville will host a beer dinner featuring the iconic brewery’s beers.

Founders began life in 1996 as the John Pannell Brewing Company by Mike Stevens and Dave Engbers. The name referred to the first brewer to open a brewery in Grand Rapids. That original brewery opened in 1836 and was operated by Pannell until 1849 when it was sold to German brewer Christopher Kusterer who later consolidated with six other local brewers to form the Grand Rapids Brewing Company.

But, Founders made its mark on the beer world with two iconic and highly-sought brews; Kentucky Breakfast Stout and Canadian Breakfast Stout. The two stouts sit atop many beer-aficionados’ bucket lists and currently reside towards the top of nearly every “Best Beer” list in existence.  In a 2013 poll, Ratebeer.com listed Founders as the, overall, 3rd best brewery in the world.

Because of the brewery’s stratospheric reputation, Whole Foods, Jacksonville has prepared an exceptional dinner menu featuring pairings with the iconic brews Founders is famous for. The event takes place Thursday, May 14 starting at 7:00 p.m. Below is a peek at the outstanding menu.

First Course:
All Day IPA paired with a Cheese and Charcuterie Plate

Tickets for the event are $40 and can be purchased at the link below. 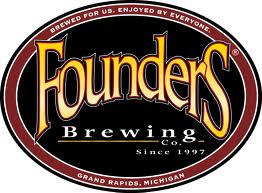 More proof that the American craft beer surge is finding its way across the pond to Europe came this week in the form of a press release April 16 from Founders Brewing Company. The makers of the popular and oh so delicious Founders Breakfast Stout, also announced on their website that their brews are being exported to the United Kingdom in bottles with draft beer to follow.

The text of the press release follows:

(UNITED KINGDOM) – Both year-round and seasonal beers will be available in bottle immediately with draught expected to follow later in the year.

John Green, President of Founders Brewing Co. said of the partnership, “We’ve been looking at export opportunities for a while now, and we’re excited to partner with James Clay in making the United Kingdom one of our first international markets.”

“We are delighted to bring Founders Brewing Co. beers to the UK market” comments Ian Clay Managing Director of James Clay. “Founders is one of the most respected breweries in the world brewing a truly world class portfolio of beers. Introducing beers of Founders’ calibre to the UK is a fantastic addition to an increasingly diverse and vibrant UK beer culture.”

James Clay are particularly excited about the arrival of Founders Brewing Company’s All Day IPA. American IPA is fast becoming the beer-drinker’s style of choice, but with most coming in at a heady 6 – 9% abv often one can’t enjoy more than a couple. Founders Brewing Company’s All Day IPA is an award winning American Session IPA that has been expertly brewed to keep all the flavour of its stronger cousins, but at 4.7%abv.

The full range of Founders Brewing beers will be available through James Clay by early May.