Down in South Florida, Funky Buddha Brewery made a splash earlier this year with the opening of their bigger and better brewery in Oakland Park. Now, the very same brewery that is legend among Florida beer lovers has announced the release date for their highly-sought Maple Bacon Coffee Porter. First released as a draft-only brew in April of 2011 at their original Boca Raton lounge and brewery, this will be the first time the brew will be bottled for release.

The beer rating website BeerAdvocate.com lists Funky Buddha’s Maple Bacon Coffee Porter as the second highest-rate porter in the world with an astounding 99 out of 100 points and over 50 raving reviews.

Ryan Sentz, Funky Buddha’s founder and head brewer said in a press release, “Maple Bacon Coffee Porter was the first beer that really earned us attention outside of our taproom. I remember thinking how crazy it was that this little brew pub in Boca Raton was being noticed nationally, and our success is definitely owed in part to that.”

The release for the first ever bottle offering of the beer will be marked with a full day of activity specially selected for the momentous occasion. Expect to enjoy live music, five food trucks – some with dishes specially prepared to pair with Maple Bacon Coffee Porter and other special release beers from Funky Buddha and other Florida breweries on tap.

The event takes place on Saturday, January 11, 2014 with bottle sales beginning at 11:00 a.m. Bottle sales are limited to two bottles per person.

Read the entire press release below:

OAKLAND PARK, FL – Get ready, Buddha fans: Maple Bacon Coffee Porter, one of the most highly sought after beers in Florida, will be commercially released in bottles for the first time ever on January 11, 2014. This limited run of 22-ounce bottles will be sold exclusively at Funky Buddha Brewery and be accompanied by a festival atmosphere featuring live music, food trucks, and a host of special release beers on tap.

A true one-of-a-kind beer, Maple Bacon Coffee Porter was initially released as a small batch run at Boca Raton’s Funky Buddha Lounge & Brewery in April of 2011. Since then it has become one of the most heralded porters in the world, earning national acclaim from fans and critics alike. BeerAdvocate.com currently lists MBCP as the #2 rated porter in the world with above 50 user reviews, boasting an overall rating of 99 out of 100. Ratebeer.com also lists the beer as the #1 user rated sweet stout in the world with a perfect 100 out of 100.

“Maple Bacon Coffee Porter was the first beer that really earned us attention outside of our taproom,” says Funky Buddha’s Founder and Head Brewer, Ryan Sentz. “I remember thinking how crazy it was that this little brew pub in Boca Raton was being noticed nationally, and our success is definitely owed in part to that.”

Maple Bacon Coffee Porter’s official release will coincide with a day’s worth of activities at the brewery. Live music from local acts will be scheduled throughout the day in the brewery’s public plaza. Five food trucks – including fan favorites The Rolling Stove and Pescados Unidos – will be serving dishes specially paired with Funky Buddha’s beers. A host of special release brews from both Funky Buddha and other Florida breweries will be available on draft, with very limited beers being tapped throughout the day. Bottle sales will begin at 11am and run until 7pm, and will be limited to two per customer; first-come, first-served.

Evoking a complete diner-style breakfast in a glass, Maple Bacon Coffee Porter is a complex beer with a multitude of flavors at work. It pours an opaque, ebony brew with a frothy tan head. Aromas of sticky maple syrup and fresh-brewed coffee creep forth from the glass. The mouth feel is luxuriously creamy, with layers of sweet malt and roast giving way to waves of smoke, coffee, and dark salted chocolate. The finish is sticky, rich, and sweet, with flavors of maple syrup lingering pleasantly on the tongue.

“Six Beers that Blew Our Minds at GABF” – Serious Eats

ABOUT FUNKY BUDDHA BREWERY: Founded in 2010 in Boca Raton, Florida, Funky Buddha Brewery is committed to producing bold craft beers that marry culinary-inspired ingredients with time-honored technique. Its lineup includes year-round brews Floridian Hefeweizen and Hop Gun IPA, along with specialty releases such as No Crusts Peanut Butter and Jelly Brown Ale and the highly sought after Maple Bacon Coffee Porter. Its Oakland Park production brewery opened in June 2013 and distributes draft beer to over 250 restaurants and bars across South Florida. 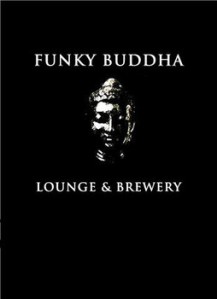 Every now and then a brewery comes along that seems to have built in buzz. These are the breweries that brew beers by their own rules and to please themselves first. Funny thing is, most of the time, those same breweries tend to please the beer-loving public, too. Funky Buddha Brewery of Oakland Park, Fla. is one of those breweries that has attained cult status.

In 2010 the brewery began as The Funky Buddha Lounge and Brewery in Boca Raton, Fla. The hip lounge features 40 loose leaf teas, 40 shisha flavors, small bites, dessert and over 110 craft beers including those brewed on site. The lounge and brewery proved so popular that just three years later head brewer and founder Ryan Sentz is nearing completion on a brand new, full production facility with a monstrous 30 barrel brew house. The behemoth brewhouse makes Funky Buddha the largest production brewery in South Florida with the capacity to pump out nearly 6,000 barrels of beer in its first year and room to brew five times that much in the future.

“We’re extremely excited that this brewery will allow us to share our passion for craft beer with a larger audience,” Sentz said. “We could not have gotten here without the support of the Funky Buddha family and the entire brewing community.”

In addition to the brewery, the new facility will feature over 30 tap lines, live music, brewery tours, growlers to-go, and much more. The tap room is practically a work of art featuring a 70’ bar top lined by tall windows looking into the brewery, and a 15’ tall, live-edged cherry wood back bar built by Asheville Mantle and Slab of North Carolina.

Funky Buddha is known for its offbeat special release beer flavors such as No Crusts Peanut Butter and Jelly Brown Ale and the highly sought after Maple Bacon Coffee Porter. But the brewery is equally known foryear-round brews Hop Gun IPA and Floridian Hefeweizen. Expect to see these in bottles as the new facility settles in and adds a planned bottling line. Distribution for the brews will be handled by Brown Distribution.

The City of Oakland Park’s new Culinary Arts District, spearheaded by Redevelopment Management Associates of Delray Beach will feature the Funky Buddha as its cornerstone. The district will also feature restaurants, markets, a culinary school, and a hydroponic farm with horticultural classes. The district’s newly renovated walking plaza sits directly in front of the brewery, and will be publicly unveiled along with the Brewery’s Grand Opening and Ribbon Cutting on June 1 from 4:00 p.m. to 12:00 a.m.