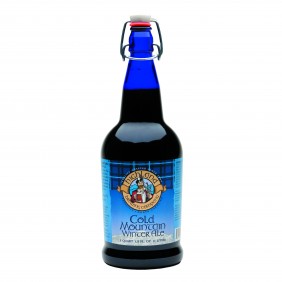 When the trees are at their peak of autumn color and the air in North Carolina has taken on a distinctly cooler snap, Highland Brewing Company releases one of its most coveted brews, Cold Mountain Winter Ale. The seasonal release is a malty, spiced ale that is named for Cold Mountain in the Blue Ridge range. The release is accompanied by a festival bringing together lively music, food trucks and plenty of Cold Mountain on tap.

If the name Cold Mountain seems familiar aside from the brew carrying its name, it is because it shares its name with a best-selling novel by Charles Frazier and later a major motion picture. The novel, published in 1997, won the National Book award in its year of publication. The movie, starring Jude Law, Nicole Kidman, and Renée Zellweger, won an Academy Award for Renée Zellweger’s performance as a supporting actress. Both the novel and the movie follow the story of a Civil War deserter’s journey home to his wife and home on Cold Mountain.

The beer is not named for the novel or the movie, rather it is named for the mountain itself as are many of Highland’s other beers. But, the historical contexts of both are, in a way fitting on a personal level for me. After going through a difficult divorce and enduring several years of depression I made a November journey to Asheville and the Cold Mountain release party with my girlfriend in 2013 and proposed to her in front of the entire event. And, this year, we will return to the event to celebrate one and half years of marriage and enjoy the pleasant company of our friends at Highland along with the wonderful beer they are releasing.

Highland Brewing Company was founded by Oscar Wong who, after retiring from a career as a successful civil/structural engineer, landed in Asheville in 1994. He started Highland Brewing “as a hobby” in the 3,500 square foot basement of Barley’s Taproom in downtown Asheville. Over time his brewing ambition grew and the brewery moved to its current location.

The Cold Mountain Release Party takes place on Thursday, November 12 with bottles of the brew going on sale at 4:00 p.m. Bottles of Cold Mountain will be sold in a variety of sizes ranging from a special one-liter, swing-top bottle, 22-ounce bombers and 12-ounce singles. Guests may purchase a limited number of each size bottle or choose to purchase a bundle that includes one, one-liter bottle, two bombers and one case of 12-ounce bottles for $50.

Guests at the release party will enjoy music from several bands and specialty kegs of Cold Mountain. They will also be treated to the opening of the brewery’s new event center. For full information about the release party and bottle pricing go to the event’s web page at: http://www.highlandbrewing.com/coldmountain.

Fewer things are more all-American than that ritual of summer that takes place in towns and cities all over the nation. In parks both grand and make-shift, players face off and swing for the fences. Fans pack bleachers, line up along fences and cheer on their teams with a hot dog in one hand and a cold brew in the other. I am referring to baseball of course; the big leagues started play earlier this week and the Jacksonville Suns – minor league representatives of the Florida Marlins – begin play tonight.

The event this Saturday costs $30, with proceeds going to a long-time E-Street bartender that is battling breast cancer and includes a Monster German Weiner t-shirt. The cost of the remaining Beer and Baseball nights will be $20, but will not include the t-shirt. The way the event works is that the food and beer are put out approximately 30 minutes prior to the first pitch. There are generally two kegs of beer available and they flow until both kegs are dry.

Andrew Zarka, of European Street, says that the featured beers this Saturday night will be Blue Moon and Third Shift. He also says that both Highland and Lazy Magnolia have expressed interest in sponsoring future games.

The remaining Beer and Baseball nights will take place:

Tickets are available at all four European Street locations.

The bustling area of town known as San Marco has long been a destination for great food and wine. But, a new establishment is adding craft and import beer to the mix. Robert Smith, a self-proclaimed “foodie” who has been in the restaurant business since 1987 has opened a new concept for the Jacksonville area with his Grape and Grain Exchange in San Marco Square.

The shop is a hybrid of a package store and a bar. Patrons can choose a bottle of craft or import beer from the cooler and either take it with them or drink it on premises from a clean class presented by the bartender/cashier. But, do not mistake this for one of those package store/bars that are sprinkled around the area and take on a seedier look, this establishment is high-class all the way. The interior is features clean lines, and subdued decorating. Wooden shelves display the small-batch spirits, fine wines, and craft beers that are available and a bookcase in the back of the store contains recipe books that Smith refers to for more esoteric drink requests.

Soon, that bookcase will also serve as the portal to the first speakeasy in the Jacksonville area since perhaps the days of Prohibition. Smith, ever vigilant of hot trends around the country, wants to take advantage of the craft cocktail bars and speakeasy movement that is sweeping the nation. Combine that with the craft beer craze and Smith thinks he has come up with a winning combination.

Tomorrow night, Friday, January 25, Smith will play host to Highland Brewing Company and 7venth Sun Brewing Company for a special tasting of a collaboration between the two breweries. Called Trailblazer, the brew is a 7.7% ABV Belgian-style porter made with raisins in the boil as well as almonds, cacao, and dried cherries in the fermenter. The tasting is $10 and includes tastes of all of Highland’s year round beers as well as one of the first pours of Trailblazer.

The tasting begins at 6:00 p.m. and does not require a ticket. Grape and Grain Exchange is located at 2000 San Marco Blvd.

Keep up to date on all the beer happenings and news going on in town by joining our newsletter mailing list at the ALL NEW www.JaxBeerGuy.com.