Jax Beer Week comes to a close today with a wrap party at Grape & Grain Exchange featuring special brews from many of Jacksonville’s best breweries.

In addition to the tastings, 6-ounce pours of special release beers from the local brewers will be available for $3 to $4. These special brews include:

For those who live at the beaches and would rather let someone else drive to San Marco, the Jax Brew Bus is offering freeshuttle rides from Engine 15 Brewing Company to Grape & Grain Exchange. Pick up times are at 5:30 p.m. and 6:30 p.m. Rides back to Engine 15 at 9:30 p.m. and 10:30 p.m. Rides are first come, first served.

Jax Beer Week is winding down, but that does not mean that the events are slowing down. Be sure to stop by the events below and be sure to sign up for our social media feeds to get more last-minute information on entries. You can sign up forour feeds at www.JaxBeerGuy.com

Also, be sure to check back here tomorrow morning for information on the week’s grand finale event!

Bold Bean Coffee Roasters
Coffee-holics have been flocking to this home-grown coffee shop for their caffeinated java, but something everyone may not be aware of is that Bold Bean also serves up some of the best craft beers in the area. On any given day you are likely to find beers from many of the local breweries on tap including Intuition Ale Works and Bold City.

Today you can swing by the Stockton Street location in Riverside for a Swamp Head Brewing Company event to commemorate Jax Beer Week.

The Florida Times-Union’s Matt Pittman is known as Matt About Jax. Other than crafting clever plays on familiar sayings, Matt is also adept at digging in to the community and finding interesting topics to commit to video tape. Yesterday he visited The 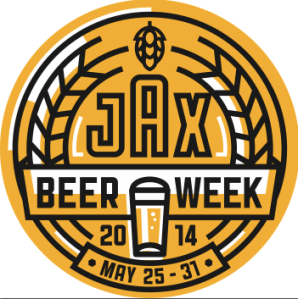 Silver Cow in the King Street Beer District for Jax Beer Week (JBW). Check out his video below and see the fun that goes on during JBW.

Be sure to come out to one of the special JBW events tonight! Check the posts below for events that are still coming up or go to my website — http://www.JaxBeerGuy.com — to sign up for my social media feeds where you will get information all the week’s events and future beer happenings.

Watch the full Matt About Town video at the link below:

Jax Beer Week is at its mid-point and the events keep getting better and better. Tonight’s line-up includes a gourmet beer dinner, a gourmet beer and cheese pairing and more special releases.

New information is also coming in regarding a week-capping event to be held Saturday, May 30 at Grape & Grain Exchange in San Marco. For just $10 you can purchase a tasting of 12 different craft beers at the event. In addition, local breweries will be offering 8-ounce pours of some very special beers for $3 to $4 each. Watch for more details coming soon.

Finally, the great folks at UBER are offering free rides (up to $20) during Jax Craft Beer week to insure that you can enjoy yourself and still get home safe. Simply follow the link below and sign up using promotional code JaxBeerGuy.

The Blind Fig
The Blind Fig teams up with Engine 15 for a beer dinner featuring tasty pairings and loads of fun.

The dinner will feature four delicious courses and five outstanding brews. Tickets to the event are $50 per person and can be purchased in advance by calling the restaurant at (904) 337-0146 or at the door. The reception beer will be served beginning at 6:30 p.m.

Black Sheep Restaurant
If there is one thing you need to know about this restaraurant housed in the eye-catching wedge-shaped building just outside of the Five Points area of Riverside, it is that you must try the poutine. The dish – French fries mixed with cheddar cheese curds and covered in rich, beef short-rib gravy – is so good that many guests go just for a fix of it. But, poutine is far from the end of the list of reasons to visit the eatery. Another good reason is the views from one of the only roof-top restaurant seating areas in Jacksonville. And, then there is the craft beer they keep on tap.

Grape & Grain Exchange
Speakeasies were once the only place for a thirsty person to get a potent potable. But, since the abolition of prohibition, the often glamorous hidden gems have gone by the wayside. But, if you are in the know, you can gain access to one of these backroom bars in San Marco right on the Square. Grape & Grain Exchange offers a self-service style beer cooler and signature mixed drinks in its front room but, behind the bookshelf is a cozy, swanky hideaway the harkens back to the flapper era.

Join the in-the-know crowd for a Cigar City cheese and beer pairing at G&GX for Jax Beer Week. But, be sure to get there early as seating is very limited.

The Cow will also be selling Abby’s Ale posters for $35 each with all proceeds going to First Coast No More Homeless Pets along with $1 from every Abby’s Ale pint sold.

Featured dishes coming from The Silver Cow kitchen tonight include:

Jax Beer Week gets going today with several events you will not want to miss. Check back every day this week for listings of what is happening and where. Also, follow our social media feeds for more up-to-the-minute information. You can access our feeds from www.JaxBeerGuy.com.

Pinglehead Brewing Company/Brewer Pizza
Orange Park seems a long way from the more beer-centric city center and beaches, but that does not mean that there is no craft beer there. On the contrary, Pinglehead Brewing Company, nestled inside of Brewer’s Pizza on Blanding Boulevard has been cranking out awesome brews for several years now – including what may be the best Imperial Red in the country. For craft beer week they have enlisted the help of the rest of the local breweries and will feature a beer from each on their taps. The first beer to be tapped is listed below. Look for the daily special tapping in the listings for the days below.

M Shack – St. John’s Town Center
Matthew Medure is known throughout the metro Jacksonville area for his fine dining restaurant Matthew’s, but he is also the genius behind M Shack in Neptune Beach and St. John’s Town Center. At M Shack, Medure taps into his gourmet cooking experience and applies it to the humble hamburger. But, given the Medure treatment, burgers at his joint are anything but humble. They are juicy, tasty, and absolutely heavenly.

As a tip-of-the-chef’s-hat to Jax Beer Week, M Shack has teamed with Engine 15 Brewing Company to offer a special price on M Burgers when you purchase a pint of Nut Sack, Russian Imperial, Old Battle Axe, or (904) Weissguy.

Taverna
Since their 2009 opening in San Marco, Taverna has been wowing diners with their innovative and tasty dishes. Locally owned and operated, the eatery focuses on fresh, local ingredients and a European-style, seasonal approach to food preparation. The fare at Taverna is heavily influenced by both Italian and Spanish cuisines with favorites like paella and Neapolitan-style pizzas.

Today you can enjoy one of those exquisite pizzas along with a pint of Intuition Ale Works craft beer for just $12.