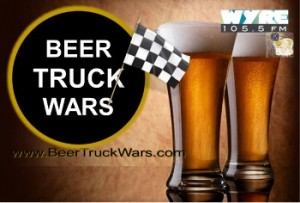 St. Augustine, Fla. is named for the Catholic patron saint of brewers. According to website Catholic Online, Augustine was made patron to brewers, “…because of his conversion from a former life of loose living, which included parties, entertainment, and worldly ambitions.” Though a quick Internet search did not unearth any archeological information on beer in the oldest city in the United States, the lack of this data does not mean that the Ancient City does not have a burgeoning beer scene.

On July 26 from 4:00 p.m. to 8:00 p.m., the usual collection of pub crawls, craft beer bars, parties and casual beer consumption will be enhanced with the addition of the first ever, Beer Truck War. The event, hosted by the Kiwanis Club of the Historic District, WYRE and Florida Expo Services, will take place at Francis Field, 29 Castillo Avenue.

Organizers of the event promise more than 30 varieties of beers from breweries such as Kona, Redhook, Stella, Johnny Appleseed, SweetWater and Bold City. In addition to the brews, guests will be treated to a collection of food trucks including Gator Country, Sabai Sabai Mobile Thai, Big Island Bowls, Rubios Baja Grill and Gourmet Aviator.

Tickets for the event are $35 in advance and are available on the event’s website: www.BeerTruckWars.com. Day of event tickets will be $45 at the gate. Admission includes unlimited beer samples and a voucher for a meal from one of the food trucks. Designated drivers and children get in for $20 and receive a meal and two soft drinks.