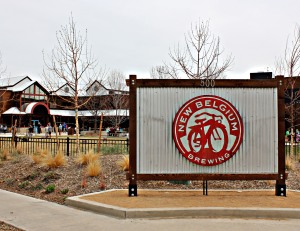 Two new flavors will be available from New Belgium in the next few weeks. The first, Voodoo Ranger Juicy Mandarina IPA, follows the current trend of juicy hops-forward IPAs.

The second is a  sour farmhouse ale aged in oak barrels named fittingly, French Oak Saison. Interestingly, this saison is a blend of a Wallonia-style saison with a soured golden ale.

Get more information about each beer below in the official press release.

Juicy Mandarina IPA pours a hazy orange and comes in at 6.5% ABV. It’s available this spring in 22 oz. bottles and on draft.

Another special release addition to the New Belgium lineup, although not part of the Voodoo Ranger family, is French Oak Saison. This barrel aged sour farmhouse ale is a limited release. French Oak Saison brings together a dry, hop-forward Wallonia-style saison with a golden ale, which is soured in French oak foeders for 15-18 months. Rye and spelt grains give the beer a medium body, while Huell Melon and Tettnang hops provide a honeydew and white pepper aroma.

This saison has a mouthwatering sourness with a clean, dry finish. It comes in at 7.5% ABV and is now available in 22 oz. bottles and on draft.

New Belgium Brewing Company is having a busy year. Between the opening of their new brewery in Asheville, NC, and their 25th anniversary celebration, things are certainly going their way. To celebrate their silver anniversary, New Belgium asked five of the countries best breweries to collaborate with them on creating new versions of their iconic Fat Tire Amber Ale.

In addition to the collaborations, New Belgium has two new Lips of Faith releases hitting store shelves this month.

Read more about the Fat Tire collaborations and Lips of Faith releases in the press release below.

Ft. Collins, Colo., June 1, 2016 –The best way to celebrate a birthday is by gathering up your friends. New Belgium’s Fat Tire & Friends Collabeeration mixed pack is starting to hit store shelves. The pack features five of the nation’s best craft breweries, with each taking a turn at reimagining Fat Tire, New Belgium’s flagship beer. This 25th anniversary package is a variety 12-pack, with five variations of the amber ale, including:

De Koninck Flowering Citrus Ale is 7.4 percent ABV, 30 IBUs, and is available in four-packs and on draft.

Tart Lychee
The 2016 Tart Lychee also debuted in June and is part of New Belgium’s Lips of Faith lineup. The beer is brewed with exotic lychee fruit and cinnamon, then blended with sour Felix from the brewery’s wood cellar for a citrusy, tropical sip that attacks with an invigorating tart bite.

What happens when one of the best loved ice cream makers in the United States gets together with the nation’s third largest craft brewer? All sorts of dessert-flavored beer goodness, that’s what! And, to top it off, the proceeds from sales of the brew will go to charity! Ben and Jerry’s Ice Cream of Vermont along with New Belgium Brewing Company of Colorado have announced plans to produce a co-branded beer that will benefit snowboarder Jeremy Jones’ Save Our Winters organization founded to help raise awareness of global climate change.

The beer, Salted Caramel Brownie Brown Ale, will weigh in at 6.3-percent alcohol by volume (ABV), but that is about all that is known about the beer at this time. Judging from the name, one could deduce that the beer will feature chocolate, caramel and salt flavors, but whether the beer will skew towards a sweeter or drier character is yet to be announced.

“Although our TTB filing for the beer is now public, specifics around the campaign are still in development,” said New Belgium Director of Sustainability, Jenn Vervier in an official press release. “At this time I can confirm that Ben & Jerry’s and New Belgium are collaborating to raise awareness around issues we are passionate about, and that the results will be delicious.”

Industry insiders predict the beer will be available sometime in the fall of 2015. 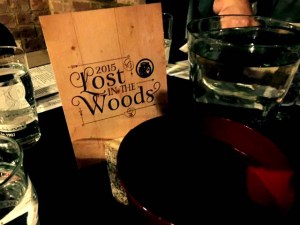 With the opening of Goozlepipe & Guttyworks expansion, Steve Flores has essentially quadrupled the size of his popular King Street Beer District anchor Kickback’s Gastropub. During the long construction phase of the project, Flores made the conscious decision to suspend hosting his popular beer dinners. But, the long drought is over with the highly successful event he hosted with New Belgium Brewing Company Saturday, February 7.

Nestled in the still-under-construction Belgian basement of G&G, the dinner was timed to coincide with the brewery’s annual Lost in the Woods event in Ft. Collins, Colo. The event in Colorado opens the doors of the brewery to lucky ticket-holders who are given a behind-the-scenes look at the brewery’s acclaimed sour beer program. 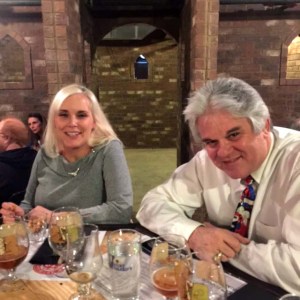 The Jacksonville event had diners seated in a dining and bar area reminiscent of a medieval brick beer cellar smack in the middle of Belgium. One could almost imagine robed monks toiling away behind the brick walls, making the kind of amazing beer they are known for.

Dinner consisted of eight courses; each paired with or made with one of New Belgium’s brews. But, it was the beer list that was truly impressive. Interspersed with the food were 25 beers including some of the most sought-after brews New Belgium has ever produced.

As the dinner unfolded, guest were treated to insightful information from local New Belgium Beer Ranger Kirsten Kelly. She related the story of how the brewery was founded and its dedication to green processes. She also provided details on how the beers being served were created.

Flores also provided details about his plans for the Belgian Basement. Once it is fully operational, the basement will serve only beers brewed in Belgium, not Belgian-style beers produced in other parts of the world. The

basement will also feature catacombs for storing and aging beers, lockers that can be rented by guests to store their rare and vintage brews and a grand, circular tasting room reminiscent of the tasting rooms found in the great wine producing areas of the world.

Flores promised that the tradition of beer dinners would continue and that the next one would be in just a few months. 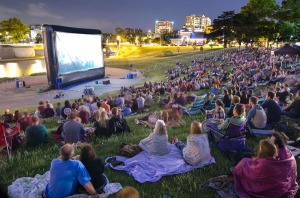 Are you a budding film director? New Belgium Brewing Company wants to see your film.Now through April 1, the beer company is accepting submissions for their sixth annual Clips Beer & Film Tour.

Clips can cover a gamut of topics and must be between 10 seconds and five minutes long. Winning submissions will be featured at the traveling event and producers will win a specially produced beer in a custom screen-printed bottle along with the coveted director’s belt buckle.

For more details, read the official press release below.

Ft. Collins, Colo., – January 23, 2015 – New Belgium Brewing is now accepting film submissions for its 2015 Clips Beer & Film Tour. Selected films will travel to about 20 cities across the U.S., starting in May; the complete tour schedule is still being finalized. This year marks the sixth year of the Clips Beer & Film Tour; a beer-toting, film-traveling, non-profit-benefitting show that travels coast-to-coast and brings communities together to enjoy esoteric beers, while benefitting local organizations.

“The overlap in the creative spirit between film and beer-making communities is tremendous and we can’t wait to see what our inventive fans come up with this year,” said Jesse Claeys, Clips content wrangler. “Every year we end up with an incredible showcase of amazing work from animation and comedy sketches, to extreme sports and even miniature replicas. Tens of thousands of annual Clips attendees are excited to see which talented filmmakers decide to share their creativity during this year’s tour.”

All filmmakers who have their filming prowess featured in this year’s tour will receive an exclusive New Belgium beer in a custom screen-printed bottle. They will also receive a coveted and rare Director’s Belt Buckle.

Film submissions can range from 10 seconds to five minutes and must be original, creative content that touches on, but is definitely not limited to:

Last year, selected films ran the gamut on genres and topics, including a banana with an attitude, ultra marathoners running with stubborn animals, neon spandex, and much, much more! It’s a diverse and highly entertaining line-up with something for everyone.

New Belgium is now accepting submissions through April 1st at http://www.newbelgium.com/Events/clips-beer-and-film/submit-your-film.aspx. Filmmakers must be at least 21 years old and must secure rights for all elements included in the film.

During each Clips show, 100 percent of proceeds from beer sales directly benefits a local nonprofit working to improve the community. Last year, Clips Beer & Film Tour raised nearly $140,000 for local organizations and approximately 20,000 people sampled beer, viewed films, and diverted 80 percent of event waste from landfills. Since its inception in 2010, Clips has raised $506,417 for nonprofits nationwide.