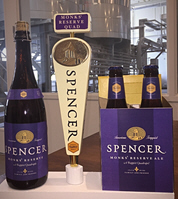 The first certified Trappist brewery in the United States, Spencer Trappist Brewery, has announced that they will release a Belgian-style quad ale. This announcement brings the brewery into alignment with many of its brethren breweries in Belgium. This is because quads are most closely identified with Trappist breweries like Sint Sixtus brewers of the coveted Westvleteren XII and Trappistes Rochefort 10.

Learn more from the official press release below.

Belgian brewing tradition developed a system of characterizing bottle-conditioned ales based on the quantity of malt and the ale’s original gravity. The resulting categories include the Single, the Dubbel, the Tripel and the Quadrupel (or Quad). Quads are “big”, strong, dark, ales that typically contain 10%+ alcohol by volume and are considered top-of-the-line products.

Spencer Monks’ Reserve Ale is fragrant, robust and full bodied, mahogany in color and crowned with a dense, tan, frothy head. Its malt-forward profile yields to a warm finish, with an ABV of 10.2%.

The recipe development phase of this Quad stretched over three years and 13 experimental brews. The Spencer monks sought an alternative to the use of spices for flavor enhancement by pushing the boundaries of traditional Trappist Quad malt profiles, even incorporating some local barley grown in nearby Barre, MA, which was craft malted in Hadley, MA. The outcome is a unique product with a distinct flavor profile well situated within the Trappist family of Quadrupel ales. Spencer Monks’ Reserve Ale received the approval of the International Trappist Association in March 2017.

In announcing Spencer Monks’ Reserve Ale, Father Isaac Keeley, Spencer Brewery Director, notes, “It is a major event for a Trappist brewery to introduce a new Quad. We took our time developing this one and we are rather happy with the result.” This beer was well received in Brussels by the Board of the International Trappist Association to whom it was presented for sensory evaluation and a vote of approval. The monks of Spencer look forward to serving this new Quad during their Sunday supper, as well as sharing it with their friends in the United States, Europe, and Asia.

In 2013 St. Joseph’s Abbey became home to The Spencer Brewery, which is one of eleven certified Trappist breweries in the world and the only one located outside of Europe. The monks of Spencer make bottle-conditioned ales in the centuries-old tradition, as well as various American craft beers – all while living the motto “ora et labora” (pray and work). In accordance with the Trappist way of life, all proceeds from their work are used to support the monastery, with any surplus donated to charity – primarily charities that help the poor. The beers crafted by The Spencer Brewery are available in Massachusetts, New Hampshire, Connecticut, Ohio, Michigan, and throughout Europe. Outside our distribution area Spencer products are available at belgianstyleales.com. The Spencer Brewery plans to start exporting to Asia later this year.