Nearly one third of all craft beer drinkers are female and more than two thirds drink less than 10 beers in a two-week period are some of the findings in a new survey released by GutCheck, a Denver, Colo.-based agile market research firm.

Criteria for the survey included both make and female beer drinkers over 21 years of age. Respondents had to have more than $30,000 a year in earnings and must drink both craft and domestic beers. Finally, the respondent must be the primary purchaser of beer in the family or share that responsibility and must have purchased beer within the two weeks prior to taking the survey.

Not surprisingly, the survey found that craft beer drinkers prized variety in their beers with about half of all respondents revealing that they had consumed craft, domestic and imported beers during the review period. But, no single brand ran away with the votes. And, since variety is so valued, no single style of beer significantly dominated the standings. Of the styles surveyed, lager was consumed by 51% of survey-takers with pale ale coming in with 41%, wheat beer came in third with 37%.

Purchasing decisions were most often driven by taste for respondents with grocery stores listed as the top place to buy beer 63% of the time. Word of mouth was also a high scoring category when drinkers were asked how they chose a new beer to try. Liquor stores came in a close second with 62% saying that is where they purchased their beer. Bars and restaurants came in third with 55%.

An overwhelming 80% of craft beer drinkers think of themselves as supporters of local businesses, one third of them believe craft brands acquired by corporate brands are sell-outs. Of those who think brewers that sell to big beer are sell-outs, 26% say they would avoid buying these brands.

Males were the highest number of survey-takers with 35 to 39 grabbing the highest-responding age group. The southern United States responded most often to the survey with the Midwest coming in close second.  Beer consumption within the two weeks prior to taking the survey was required of all counted respondents, but the survey revealed that spirits were consumed by 71% and wine sipped by 60%. Only 37% of respondents drank hard cider.

What does your drink say about you? 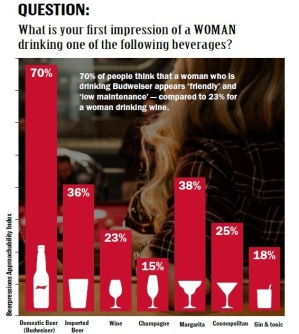 Picture this: Three women walk into a bar. The first orders wine, the second orders a cosmo, and the third orders beer. Which woman, do you think, ends up in a conversation with the tall and mysterious stranger?

According to the Budweiser ‘Beerpressions’ National Survey—a first-of-its-kind study about how beverage choices influence first impressions—your drink may be worth a thousand words.

Based on a representative survey of 2,000 Americans (ages 21+) conducted by Learndipity Data Insights, Budweiser asked respondents to match common bar drinks with the perceived personality traits of the people ordering them.

So what does your chosen drink say about you?

Drink Choice #1: Domestic Beer (Budweiser)
-70% say a woman with domestic beer (Budweiser) is “friendly” and “low-maintenance.”
-59% believe a man with this drink choice seems to be “authentic” and “genuine.”

A. PEOPLE DRINKING DOMESTIC BEER (BUDWEISER) GET CHATTED UP MORE
22% of men and 20% of women report that “more people chat with me at a bar” when drinking a domestic beer like Budweiser (compared to wine or other cocktails)—but only 11% of men and 10% of women observe a similar effect for imported beer.

B. PEOPLE COMMUNICATE VIA THEIR DRINKS—ESPECIALLY AT WORK EVENTS
While 20% of Americans will actively consider how their drink order will be perceived by others while out with friends, nearly twice as many think strategically about their drink choices at a work event (39%) or on a date (34%).