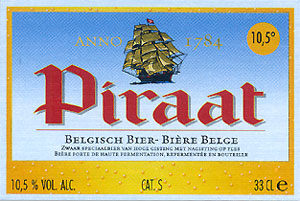 The First Coast has had its share of pirates and pirate invasions. On any given day, pirate impersonators can be found strolling the streets of St. Augustine and Fernandina Beach is practically overrun by the Captain Jack Sparrow look-alikes during the Isle of Eight Flags Shrimp Festival. So, it is only logical that the internationally recognized “Talk Like a Pirate Day,” held annually on September 19, is a big deal in this part of Florida.

The importer of Piraat beer, Global Beer Network, have taken the fun of the day one step further by sponsoring a contest that asks beer and pirate enthusiasts everywhere to submit their best pirate impression on video. Organized in alliance with the Talk Like A Pirate organization, the contest is both an online video contest and real-life, in-person pirate impression contest at participating pubs, bars and restaurants across the U.S.

The grand prize winner will win a year’s worth of Piraat beer, the official beer of pirates everywhere.
The contest runs through September 30, 2014. Winners will be announced October 1. Entries can be submitted on the Piraat Facebook page, https://www.facebook.com/piraatbeer. To enter, simply “like” Piraat’s Facebook page and post your video. Check back to see if your video was chosen to be featured!

Piraat is a Belgian Triple Ale. The beer was created centuries ago to accompany sailors setting out on long voyages. In the 17th and 18th centuries, captains needed beer with high food value that could be kept fresh for an extended period of time. Piraat, due to its high ABV (10.5 percent) and second fermentation, was the perfect type of brew for these voyages. A pint a day was the ration passed down by the captain to his crew. Piraat has a well-rounded body and rich flavor. The powerful glow builds from the inside with a deep golden hue and soft haze. The beer is aggressively hopped and features copious amounts of malt. It features a mild sweetness coupled with colorful aromas, fresh bread, spices and tropical fruits for a complex taste.