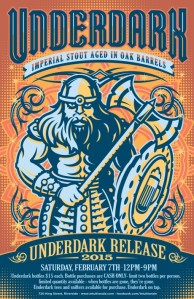 For the past few years, Intuition Ale Works in Jacksonville, Fla. has hosted an annual release party for their highly popular Underdark Imperial Stout. But, this year’s release, the third in the series has met with a snag. In a surprising email released Monday, May 18, 2015, Intuition owner Ben Davis has issued a recall for the entire release of 2015 Underdark.

In the email, Davis sites that testing results indicate that the batch is infected with lactobacillus, a harmless but destructive type of bacteria that causes sour flavors to develop and is used in beers that are meant to have sour characteristics. Lacto, as it is known in beer circles, is a highly aggressive yeast that can easily run rampant in a brewing environment. The infection, Davis says, was traced back to one of the older bourbon barrels used to age the 2015 batch of Underdark.

The brewery has expressed a concern that, because of the lacto infection, the beer in bottles may continue to ferment causing significant internal pressure on the glass and increasing the chance of the bottle exploding. Davis, recommends that unopened bottles of the beer should be stored in a cool place to minimize the rate of fermentation and that unopened bottles should be transported in a box for safety. It is also recommended that bottle should not be left in a car if it will be left alone in the heat for any length of time.

Read the entire email from Intuition owner Ben Davis below.

Intuition Ale Works is announcing a total recall of our 2015 Underdark barrel-aged stout. We have found through testing that the 2015 batch contains lactobacillus that is causing unwanted sour flavors to develop in the beer.

Lactobacillus is commonly used to deliberately sour beers like lambics, Flanders reds and other Belgian styles, and our staff has enjoyed tasting the way this year’s Underdark has developed. We traced it back to one of the older bourbon barrels that we used for the 2015 batch of Underdark.

However, we realize that a sour stout was not the intended style of this year’s Underdark, and it is not what you purchased. We are therefore offering a full refund to anyone who chooses to return their unopened 2015 bottles.

The unopened bottles of 2015 Underdark should be returned to the Intuition Ale Works tap room at 720 King Street. We will issue a $15 cash refund per bottle, or $25 Intuition gift card per bottle that can be used towards purchases in our tap room.

Please bring the Underdark bottles to the tap room in person during opening hours (Tues – Fri 3-11pm; Sat 1-11pm). It is illegal for us to accept shipments of beer and the beer could potentially explode during transit through the postal service. No refunds will be issued for opened bottles of Underdark.

In the meantime, please store bottles of 2015 Underdark in a cool place before returning them. We are concerned that the beer will continue to ferment in the bottle which will cause excessive pressure and the bottles could potentially explode, especially if they are stored in a warm environment. Avoid transporting bottles of 2015 Underdark in your car if it will be left unattended in the heat for an extended period of time. To be extra cautious we recommend storing and transporting bottles in a box.

We have found there to be significant bottle-to-bottle variation in lactobacillus content and your bottle(s) of 2015 Underdark may not have developed sour flavors, especially if they have been stored in a cool environment. Please note, however, that the beer may sour as it ages.

We sincerely apologize for any inconvenience this has caused you. We have recently hired a Quality Assurance manager to avoid repeat incidents in the future and for us to make the best beer possible going forward.

We understand that many of you traveled to Jacksonville specifically for the release of this year’s Underdark vintage so there is no time limit for returning bottles and receiving a full refund or gift card. We deeply appreciate the trust you put in Intuition Ale Works and we thank you for your support.